2.5
No one should conflate this with a true ergonomic workstation. We advise anyone looking for a permanent setup for their home or office to invest an extra few hundred dollars in a more solid device. The Kangaroo is a fantastic sit stand workstation that offers adequate ergonomics, not to mention better stability and more space. Nevertheless, the WorkEZ's low pricetag can still be compelling carrot for those still on the fence about whether they should get a standing desk. Its small profile makes it a suitable travel companion, to get at least a modicum of standing done while you work on the go. And its range of adjustability dwarfs other so-called "portable workstations." The WorkEZ is kind to the back and the bank, though far from a complete and permanent workstation.

There are plenty of cheap sit-stand products on the market, and there are plenty of ergonomically solid ones out there as well. The WorkEZ sit stand workstation (and its many look-alike competitors like the iCraze and Furinno) splits the difference, mixing flimsy construction with a low price point: an easy trade-off for many new standing desk or treadmill desk users who aren’t quite ready to commit to a dedicated workstation.

A WorkEZ consists of two separate articulating trays, one for a laptop or monitor stand, and the other for a keyboard. We saw the sense in this configuration right away. There are plenty of products on Amazon that look almost exactly like the WorkEZ (a quick scan on Alibaba.com unveiled numerous Chinese knock-off manufacturers), but they generally come as single trays, and are billed as a “portable computer platform”, “laptop stand,” or “laptop desk.” Pairing two of them up to create a “desktop riser” is a simple hack, but a clever one. Dual, independently-adjustable platforms is a crucial desktop riser feature. Without it, it’s difficult to find a comfortable distance between keyboard and monitor – a distance that changes as a worker moves from sitting to standing.

Each platform is made of a very light aluminum, making it easy to carry around. Indeed, the WorkEZ is billed as a portable standing solution. Its locking adjustable leg segments fold together, resulting in a slim profile not much thicker than a typical laptop. This could be useful for work on the go—in coffee shops, for example—or for frequent travelers who want to get some standing work done in their hotel room.

Both the keyboard platform and monitor platform are highly adjustable. Each leg’s three segments can be placed in a basic “z” formation and are then adjusted to an appropriate height and angle. All of the WorkEZ’s three pairs of joints can fully rotate, though the third pair (directly under the tray) is limited by leg position. This range of rotation allows you to bend the WorkEZ into just about any shape you could hope for. Finally, the stands also can be flattened out for transport – the WorkEZ is one of the most portable risers we’ve seen to date, and could travel in a backpack or suitcase without issue. Yet its high range of adjustability gives the WorkEZ an advantage over other portable standing workstations like the fixed-height StandStand. One particular benefit of this system is WorkEZ’s ability to provide negative tilt on the keyboard tray. We generally rely on adjustable keyboard trays for this ergonomic advantage, but the WorkEZ manages it unaided. Even a few degrees of negative tilt help keep forearms and wrists healthy by eliminating wrist extension (excessive curl back toward the forearm), allowing a worker to keep their hands in a low-stress, neutral position. Your average keyboard tray can hit an industry standard 15º of negative tilt. The WorkEZ – which costs half as much as your average keyboard tray – can go to any angle you’d like it to. Lips on both of the trays keep your tablets, laptops, and papers from sliding off of a tilted platform. Not that we’d recommend balancing your laptop on a fully vertical tray.

Not an Easy Riser

Adjustment is a somewhat tedious affair, and you have to adjust each joint individually. Leg joints are labeled with degrees, and a helpful included manual gives advised positioning for sitting, standing, and reclining. But it doesn’t change the fact that adjustment is a slow process. Legs cannot be adjusted simultaneously, instead, you’ll have to get one leg in position, then attend to the other. The upshot is that the WorkEZ isn’t great shakes as far as sit-stand stations go. It should be considered a single-user, super-lightweight standing desk, but the easiest way to go from standing to sitting is simply to take your laptop off the upper stand, make some room, and work on it. And you know we don’t often recommend that.

Of course, the WorkEZ’s manageable size comes at the cost of height adjustablility. The WorkEZ Executive, the largest version available, is only capable of around 20” of adjustment for monitors. By contrast, the Workfit-T, with its monitor mount, can take your monitors almost 3 feet above your desk. A consequence of this is that the WorkEZ may force you to crane your neck down, increasing the risk of strain.

Well, it IS Extremely Cheap 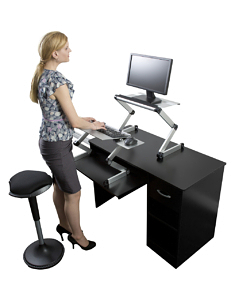 It’s important not to forget that you’re still dealing with lightweight materials. WorkEZ trays can support a maximum of 13.2 pounds (6 kg). They’re purpose-built to support laptops, and not very large laptops at that. While plenty of Amazon reviewers report using them with height-extending monitor stands, plenty of Amazon reviewers also report feeling really nervous about doing so. While we’ve balanced relatively heavy laptops on fully raised WorkEZ stands, the end result always looked like it could be knocked over by a stiff breeze. Most of our testers didn’t feel comfortable leaving their laptops unattended. Dual-screen user? Don’t even think about it. Either get an extra tray, or find some other method of mounting your monitors.

The general shakiness of the trays can be a little irritating while typing. Again, you won’t notice the vibration on your monitor (not something we can say for most other risers), but you will feel the keyboard bouncing about under your hands. We found that users generally adapted quickly to the bounce, but not so quickly to the slide. WorkEZ legs lack any traction pads. Many users found that the trays had a tendency to “skate” from side to side. This is by far the biggest safety risk for users, as the WorkEZ’s limited weight becomes a liability. More robust sit stand workstations secure to your desk with a clamp or, in the case of freestanding models like the Kangaroo, include a heavy base to keep it secured on top. They’re more cumbersome, but not as cumbersome as dealing with a broken laptop.

One feature we truly disliked about the WorkEZ was the optional mouse tray attachment. These miserable little platforms attach to the leg of a main tray, where they cause no end of grief. Problem one is size – they’re simply not large enough for comfortable use of an optical mouse. Trackballs and trackpads will fare better. Problem two is position. The mouse tray sits considerably lower than the main keyboard platform, forcing users to reach downward for their mice. Yes, it’s good to keep your arms at more than a right angle, but going below the height of your keyboard isn’t advised. Finally, we just didn’t like the way the tray felt. While the rest of the WorkEZ was flimsy, the mousepad was downright horrendous, and didn’t provide any sort of stability for the user.

See how the WorkEZ standing desk compares to other units in our Top Stand Up Desk Converters Under $350.

Uncaged Ergonomics offers a 30-day replacement warranty on its products.