Varidesk is one of the original standing desk converter industry giants, and this is their first foray into the electric standing desk market. They've always been known for their massive branding budget, as well as their high prices. The difference with this product is that it's not an industry leader—it's late to the party with outdated features and a very high price point.

Compare to All Electric Standing Desks

Assembly is easier and quicker than most standing desks. Stability and lift capacity are good, and the tabletop laminate finishes are thermoformed around contoured edges (though only five are available.)

While it may have the recognizable Varidesk brand name behind it, the ProDesk 60 Electric's outrageous price tag makes this desk hard to recommend. An outdated "kneecrusher" crossbar between the legs of the desk is a bizarre design choice for a product at this price. The lack of available customization options leaves us further baffled.

The Varidesk ProDesk 60 Electric is simply not worth the cost. It may be a serviceable product, but that doesn't mean it should cost as much as it does. Either save your money or look into premium alternatives—your shins will thank you.

Our Long History with Varidesk

We've been reviewing Varidesk products since the company was first spun out of costume and decorations-manufacturer Gemmy Industries in 2013. That's when they first introduced what was at the time a highly-innovative new product, the Varidesk Pro standing desk converter. The Varidesk (originally called the Versadesk but that was stopped by a lawsuit from Versatable) started out as a CEO's pet project inside of Gemmy, and has exploded to become one of the largest brands in the office fitness sector today, and still the sales leader in the desktop converter segment.

Since then the company has rolled out a long list of variants all using the same patented, albeit now-antiquated spring counterbalance mechanism, including the Varidesk Laptop 30 Sit Stand Workstation, Varidesk Cube Corner Corner Standing Desk Converter, Varidesk Pro Plus Standing Desk Converter, Varidesk Exec Series, and a whole bunch of accessories including the Varidesk ActiveMat. Over the past five years their success has attracted dozens of competitors who have been out-innovating the innovator (the phrase "pioneers get the arrows in their back" leaps to mind), and plenty of copy cats just knocking off their overpriced products and selling them for less. (See our Varidesk Alternatives primer for a taste of what's going on in that category).

With the ProDesk 60 Electric, Varidesk has decided to throw their hat in the ring and slug it out with a few hundred incumbent electric standing desk manufacturers, albeit with a rather unremarkable design. We're highly disappointed that this was the best they could muster up after a truly unworthy first attempt at making a desk product, the ProDesk 54 Adjustable-Height Desk— or as we affectionately refer to it around here, the Varidesk Platypus.

We’ve reviewed so many standing desks that it’s often hard to rank one copy-cat design relative to its nearest peers. In this case we were not so challenged. There’s no way to say this other than to be quite blunt. At $999 the ProDesk60 Electric is priced more than 2x what you'd expect to pay for a desk of the same quality. For a thousand dollars you’d expect an American-made, high-tech desk with a solid warranty, not an outdated design with low-cost Chinese parts.

Don’t be fooled by the marketing glitz and outlandish claims on the Varidesk website, or the surprisingly well-written and typo-free user reviews quite transparently written by their own marketing department. This is another instance of brand name power masking an underlying lack of quality. Comes With Its Own Knee Crusher

What Varidesk calls a “stability bar” is a band aid for a wobbly set of legs, and only partially effective at that. Standing desks that you could buy ten years ago usually had one, but they were hated by customers because you’d bang your shins against this bar every time you scooted forward in your seat.  The term “knee crusher” came to be bandied about so pejoratively that most manufacturers removed them from their desk products years ago.

Almost all modern-day desk designs worth their salt in stability have relocated this stabilization bar to just under the desktop, usually screwed to the wood as a “crossbar,” borrowing stiffness from the desktop itself to add to the lateral stability of the desk.

And in fact, the Varidesk also has crossbars attached to the desktop, and since it’s only 60” wide that should provide plenty of stability. The fact that an additional stability bar is required to span the lowest of the telescoping linear actuator tubes is bewildering. All this points to the “glides” between the telescoping tubes—the single most important component of any lifting column—being of such poor quality as to need "belt and suspenders" to maintain stability.

You can learn more about the technology differences that affect standing desk stability in our primer on Why Some Standing Desks Shake More Than Others.

One Size Fits All

In this day and age, any good standing desk will come in a wide variety of sizes and colors. However, Varidesk has limited their offering to only one size: 30” x 60”. If this feels familiar it's because they've taken a note out of Autonomous' commodity Chinese-made SmartDesk 2 standing desk offering only a single size (30" x 53" in their case) in order to minimize inventory investment.

As colors go Varidesk gives you the choice of Black, Butcher Block, Darkwood, Reclaimed Wood and White, which sounds like a nice palette until you realize that these are all just different images printed on the same thermoformed laminate. Don’t expect real “reclaimed wood” or “butcher block,” though there’s no disclaimer on the website to tell you so. The only specific information they give on their laminate technology is that it’s “hardened,” whatever that is supposed to mean. To learn all about the differences between authentic and faux (like this) reclaimed wood, be sure to check our our comprehensive round-up of Reclaimed Wood Standing Desks.

The base color is tied to the tabletop color: silver bases are paired with white tops, and slate gray bases are paired with everything else. So, all in all you’re looking at five options—just the desktop color—as compared to the thousands of size/shape/color combination options you’ll find on something like the American-made iMovR Energize. If you're looking for something in this price range that is more truly factory pre-assembled and tested, and can be installed in minutes with no tools whatsoever, check out the iMovR Lander. 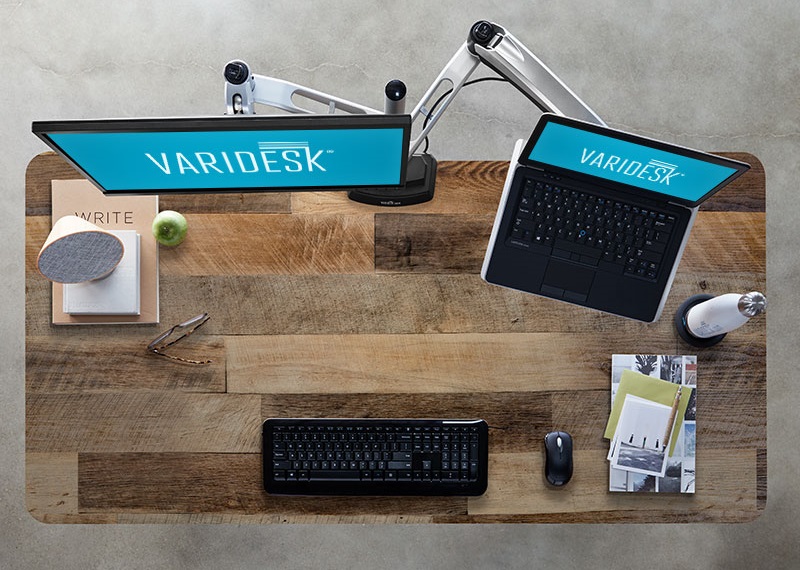 The desktop features a 26.75" W 0.75" D indentation in the back, allowing you to cleanly run your cables down the back of your desk while your desk is positioned flush against the wall.  This comes in lieu of grommet holes which accomplish the same purpose, and at this price point would certainly be expected. Aesthetically, the Varidesk's indentation is a simpler solution—the trade-off is that you lose the ability to outfit your desk with grommet-mounted accessories, such as desktop power nodes, wireless phone chargers or certain monitor arms.

Varidesk’s claim that the desk “Assembles easily in 5 minutes or less without special or complicated tools” is flatly unrealistic, but it is easier than many other standing desks. While the crossbars come pre-mounted to the desktop (a definite plus), you still have to position the legs in the receiving sockets and secure them in place with Allen bolts using the provided Allen wrench, attach the pigtail cables to the power supply, attach the stability bar to both legs, and then finally install the cable tray before flipping the desk over.

It’s still better than the assembly process on many desks, for sure, but “five minutes” is a serious stretch. If a pre-assembled standing desk is what you're looking for you'd be disappointed with the ProDesk 60. For this kind of money you could get yourself a Lander Desk, that actually is pre-assembled, with the final pieces coming together in just a couple of minutes, no tools required. The lift rating (250 lbs), hand controller with three programmable height presets, height adjustment range and other specifications that Varidesk discloses are all respectable for an entry-level standing desk.  However, at $999, these are unimpressive specs. The five-year warranty is similarly unimpressive. While American-made standup desks typically carry ten-year warranties, so does the StandDesk Pro also made in China, at half the price of the Prodesk 60.

The Prodesk 60 Electric is another Chinese-made, me-too desk at an American-made Cadillac price. Its specs are indeed adequate, but the outdated knee-crusher crossbar below the desk combined with the lack of customization options makes it tough to recommend this product. If you’re going to go with an imported desk, there are cheaper options that offer comparable specs, and if you’re going to pay a grand for a desk, you might as well go with something with a better warranty, better componentry, and more available options.

You can see all of our expert reviews of height adjustable desks in our round-up of the Best Standing Desks Reviews.

Want to Sell A Used Varidesk?

There's a lot of people in the same boat as you. Check out our brief article for tips. 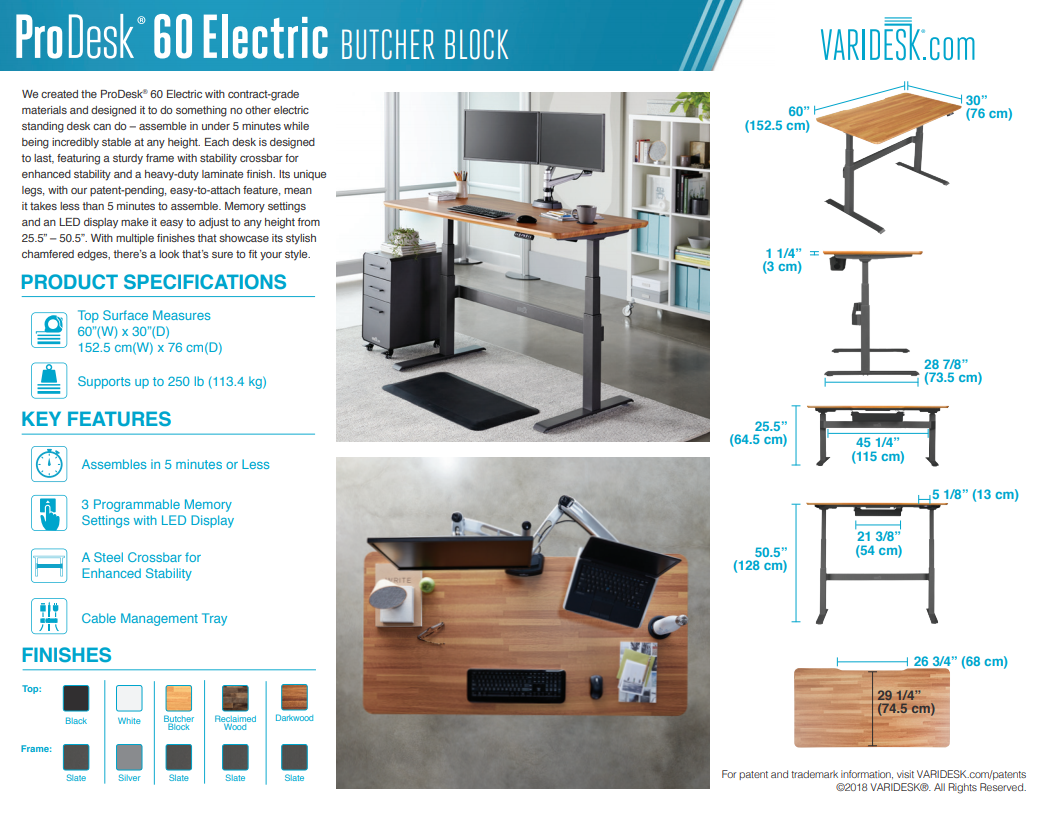