2.5
For a company that regularly manufactures radiology tables and heavy-duty adjustable-height work benches, making a no-frills stand up desk for your standard, corporate office should be a piece of cake. Instead, the Elevate II feels less like a premium desk, and more like a bargain brand. The Elevate II's meager 150-pound lifting capacity is one of the lowest we've seen for an electric desk, and its short height range disqualifies it as a treadmill workstation. Most unfortunate is its most unique feature, the "Tilt-and-Go" wheels system, which becomes more of a hindrance than a benefit as it severely reduces the desk's stability, increases the desk’s tip-over risk, and makes the desk very easy to slide out of place.

Editor’s Note: After being acquired by Ergotron in 2015, which itself has since been acquired (and rumor had it, is on the market to be sold again) Anthro Furniture has been gradually disassembled and its original Portland headquarters and factory has been shuttered. These desks are no longer being produced but we leave our original view here for posterity.

Anthro Furniture, a Portland-based company with over 30 years of manufacturing experience, built its name in the education, healthcare, and hospitality fields. They design products ranging from mobile laptop charging carts for universities to radiology desks for hospital labs. Anthro is known for technology-empowered, heavy-duty work benches. The Elevate II was designed to be a simpler, more affordable multi-purpose desk for use in a more conventional office setting. And it quickly became apparent that this type of desk isn’t Anthro’s forte. 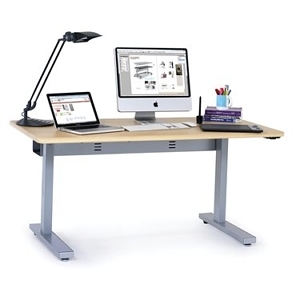 Putting together the Elevate II is more complicated than many of the other desks we’ve built. This is largely due to the instructions’ illustrations, which can be hard to parse at times. They feature line drawings of the components and hardware in incredible detail; however, there aren’t many illustrations in the manual, and many are too small for the level of granularity in these drawings. The manual could benefit from larger illustrations, or featuring more illustrations for every step.

Curiously, and unlike other desks, the Elevate II’s leg isn’t directly attached to the table top. Instead, you’re required to carefully position the leg atop the table, and cover the actuator with a metal housing bracket. This bracket, rather than the leg, attaches to the table top and theoretically will secure the leg in place. But even with the housing drilled down, we found too much wiggle room between the leg and the desk top, which made it difficult to keep the leg at a perpendicular angle. Even after we assembled the desk, the legs were a little uneven; we had to go in with a leveler and manually push the legs into place.

Fortunately, the Elevate II does take a few steps in the right direction when it comes to assembly. First, Anthro provides all the tools you need, and with a level of quality higher than the “disposable” assembly tools one might expect to find. A 3-way wrench and a hex driver with an actual handle make for a more comfortable assembly experience. The Elevate II table top also includes pre-drilled holes for attaching the base to the table top, effectively taking the guesswork out of centering your table top, and eliminates the risk of damaging the finish that comes with pre-drilling your own holes. These features go a long way towards saving users’ time and frustration.

A common practice for desk manufacturers is to finish their table tops using a simple, high-pressure lamination (HPL) technique. This method presses a sheet of laminate to the desk top’s core, bonding the two together. The laminate sheet can feature any of a wide array of attractive color patterns and woodgrains, and costs much less than using a slab of hardwood. The problem with this lamination technique is that it only applies to the table’s top. To cover the edges, a separate PVC band is glued to each edge in a process imaginatively called edge banding. The result is a cheap-looking table top that’s susceptible to moisture damage, with edge bands that are liable to peel away over time.

The Elevate II’s table tops, on the other hand, belong to a new category of tables finished with an advanced 3D lamination technique. This newer lamination method seals the entire table top—even over edges, around corners, and through grommet holes. It’s impervious to moisture damage and boasts an attractive, seamless design. It also allows the Elevate II to feature an ergo-contoured front edge, for a more wrist-friendly desk shape. We don’t see this style of lamination often—the only other notable manufacturer using it that we’ve reviewed is iMovR—but we love it when we do.

However, we’re somewhat disappointed by the paucity of configuration options available with the Elevate II. The metal base frame only comes in silver and the table top has just three color options: Black, Maple, and Wenge (a sleek, dark brown woodgrain). More importantly, the desk comes in only two sizes: 29″ x 48″, and 29″ x 60″. With so few available options, it may not be possible for some users to get an Elevate II that suits their office space or décor.

Mid-Tier Features, at a Premium Cost

Anthro designed the Elevate II to be their no-frills desk option, and in that they succeeded. The Elevate II resembles many average, mid-tier desks on the market. A simple, two-button, up/down controller adjusts the desk height at a quick 1.5″ per second speed. While not the quietest, the desk’s motors hummed along at an acceptable 48 dB during height adjustments. The desk has two telescoping leg segments, as opposed to three, and therefore has a smaller height range—the desk adjusts from 28″ to 47″— and it has a very, very low 150lb lifting capacity (more on that later). The Elevate II does feature a strong warranty—lifetime on the frame and table top, five years on the legs and electrical system.

Taken together, the Elevate II has a very basic set of features, similar to many low- or mid-tier electric desks available today. The difference is that the Elevate II has a starting price over $1,500—nearly twice as much as other desks with similar features. The Elevate II’s high price puts it solidly in the premium range, where controllers with programmable height presets, more customization options, and larger sizes are available. And the Elevate II just isn’t equipped to compete with desks in this price range.

While the Elevate II’s 47″ max height is solidly within ANSI/BIFMA standards, it’s definitely on the shorter end of the spectrum. In fact, we wouldn’t recommend this desk for use with an office treadmill: The extra 5 – 6″ of height from the treadmill will make most users too tall to use this desk ergonomically.

We’ve mentioned before that Anthro already makes heavy-duty furniture for the healthcare industry. Their radiology desks are state-of-the-art lab machines, and their adjustable height work benches can lift up to 400 lbs. So imagine our surprise to learn that the Elevate II’s weight capacity is a mere 150 lbs. The only other electric desk we’ve seen with such a paltry lifting capacity is Ikea’s Bekant desk. While 150 lbs. might sound like overkill for a desk, remember that weight ratings refer to an evenly-distributed load directly on top of the desk. Nearly all desk workstations have weight concentrated in a few places—wherever computer towers and monitors are—resulting in an uneven load distribution. The desk’s motors not only have to deal with uneven weight distributions, they have to overcome side loads as well, so it’s important that a desk have a large weight capacity to reliably handle all the different weight configurations. For the kind of money the Elevate II’s going for it needs a reliably strong desk base, and a 150 lb. weight limit makes us doubt that it has one.

Tilt and Go and Other Features The Elevate II does come with some interesting features that make it a cut above your average workstation. Included with the desk is a large metal cable trough that attaches directly under the base frame and spans nearly the width of the desk. This cable management system provides a space to collect your cords and surge protectors, and makes it easier to keep your desk free from cluttered wires. Be careful, though—with the cable trough in place, there’s less room available to clamp your monitor arm.

What really sets the Elevate II apart from just about any other desk on the market is its unique “Tilt-and-Go wheels” feature. It’s not the first desk to feature a set of wheels—many of iMovR’s desks, as well as the ModTable and Mod-E, offer caster wheel accessories. But compared to these conventional choices, which slap a set of four wheels under the feet, the Elevate II does something a little different: Two wheels are built into the back of each foot, and these would in theory allow you to simply tilt the desk back to reposition it wherever you want. In reality, the idea is somewhat ill-conceived, and our reviews team raised a collective eyebrow at the inclusion of such a “feature”. We stay away from desks that have any tip-over risk, yet here’s a desk design that encourages it. And that tip-over risk becomes palpably real when you combine the difficulty of controlling heavy furniture when it is tipped and mobile with the fact that the Elevate II’s feet have very little space in the back. It may not surprise you to learn that no one on our team was willing to test the “Tilt-and-Go” wheels with their own laptop on the line.

Moreover, the wheels make the desk very hard to keep in one spot. Even without tipping the desk back, it’s surprisingly easy to accidentally move. Bumping into or leaning on the desk causes it to slide out of place. These wheels don’t lock, and the desk does not have a no-wheels option, so you’re more or less stuck with them. If Anthro wants a wheeled mobile desk, they should scrap the Tilt-and-Go wheels for the safer, more conventional approach that other desks take.

At over $1500, the Elevate II is firmly priced in “premium desk” territory. And that prestigious territory comes with certain expectations: a more advanced controller, taller height adjustment range—and of course, a greater weight capacity. Instead, the Elevate II has more in common with budget-class desks than with the top-shelf options at its price range. While Anthro does try to think outside the box with the Elevate II’s “Tilt-and-Go” wheels, this new feature ends up being more of a liability than anything else. We know that Anthro has many more impressive desks in its catalog. We’d love to see these options adapted to the office at a competitive price and with many of their capabilities still intact. Until then, the Elevate II just doesn’t cut it for us.