Go from sitting to standing in record time with the quickest desk on the market.
Overview
Reviewed By

As fast as you can lift it

No plodding electric motors or crank handles – a counterbalance system gives the Float Table as seductively quiet and smooth gliding adjustment in the blink of an eye. Extremely well designed; users have praised the wide desktops (customizable) and uncluttered foot space. Made with sustainable practices for the green-conscious consumer. Very popular with the high-decor lot like law offices and financial firms.

High quality, high cost. The Float Table is brilliant piece of work, but standing and treadmill deskers on a budget may balk at the price tag. The "removable crank" option is a pain to adjust - we strongly recommend the built-in crank option for resetting the weight settings on the counterbalance mechanism. The Humanscale aesthetic, while beautiful, can be tough to match unless your office has modern solid-color decor. If you're looking for woodgrain colors in the same league of a adjustable height desks check out iMovR's Thermodesk line.

The Humanscale Float Table is by no means a budget item: With a $1,499 price tag, it exceeds the cost of other manual-adjustable standing desks—and even some electric desks. And its counterbalance system lacks the lifting capacities of more traditional height adjustment mechanisms. But with a blindingly fast, whisper-quiet height adjustment method—not to mention Humanscale's signature shine—the Float may be the perfect desk for users willing to spend a little extra dosh for something different.

With the zooming popularity and consequent rapidly declining costs of today's electric standing desks, manual (crank) desks have more or less gone the way of the dodo bird.  There are still a few rare models left for sale but they are no cheaper than low-end electrics. Their obvious advantage is that they don't need to be plugged into a power outlet work. Position them anywhere in the office and you've got yourself a sit-stand workstation.

However, crank desks suffer from some serious deficiencies. They're quite slow compared to the motorized efficiency of an electric desk. Even at a height adjustment rate of three turns per inch, you're looking at spending 30 seconds every time you switch between sitting and standing, compared to 10 or less with an electric model. That much cranking can be a real deal breaker for less-patient users who weren't exactly looking for a workout today. That's what makes Humanscale's Float Table stand up desk so alluring. It forgoes the crank for a speedier adjustment method, without motors.

There are many standing desk options out there but few that are completely made-in-USA. The Float Table is such a beast, and it shows in everything from its design innovation to its warranty. You can read more about the stark differences between Made-in-China versus Made-in-USA Standing Desks.

A Floating Desk? You Gotta Be Kidding Here at WorkWhileWalking, we’re used to seeing standing desks operate with the aid of an electric motor or hand operated crank.  The Float Table stands apart with its unique crank-free counterbalance system, which relies on a tension system to act against a load.  Simply depress a small paddle to release the brake, then effortlessly lift or lower the desk top. You can adjust the desk one-handed—a nifty office trick if you’re trying to impress your colleagues. It's an adjustment mechanism we've seen on some standing desk converters, but Humanscale has pretty well cornered the market on full-sized counterbalance standing desks.

For something that's such a departure from the standing desk norm, the Float Table has a surprisingly familiar installation process. Aside from the spring tension adjuster and the release paddle, you're basically attaching a wooden top to a pre-assembled, all-metal base. Attaching the desktop is actually easier than on typical standing desks, thanks to insert nuts embedded into the underside of the Float desk top. These insert nuts, which are also featured on other premium American-made desks like iMovR's Lander and Energize, make attaching the base easy and mess free.

As pre-assembled desks go the Float Table stands alone with only one other, the iMovR Lander Electric Desk with Smartphone App. The difference is that the Lander, which is five years newer than the FloatTable, takes only a few minutes to unbox and put together and requires no tools, whereas the Float Table still requires attachment several components using tools, and a post-assembly process of tuning the counterbalance to the weight of the items on your desk. The FloatTable's base is also very heavy; this is a two-person job, to be sure.

A Stand Up Desk with Humanscale's Signature Sheen

Humanscale is a company that specializes in good-looking furniture and equipment. Their M2 and M8 monitor arms are stylish assemblies of steel and aluminum, and their Quickstand Sit-Stand Workstation takes a page from the Apple School of Design, with its white-and-gray minimalist aesthetic. It even has an elegant way to hide unsightly cables.

The Float Table takes Humanscale's design principles and applies it to the larger arena of stand up desks. The base is thin and sleek, made from steel and aluminum. Its table top is a basic high-pressure laminate (HPL) affair with a thin beveled edge that makes it easier to grip the height-adjustment paddle.

Glide Your Desk to Standing Height Once you've finished putting your Float standing desk together, the next step is to tune the counterbalance system to the right tension. To do this, set up your workstation as normal—placing your monitors, computer, and whatever else you need on top of your desk. Turn the tension crank until you're able to lift and lower the desktop easily with one hand. Once set, you will only need to readjust the tension if you add or subtract a significant amount of weight. Humanscale offers both removable and mounted crank versions of the Float Table (the mounted option costs $80 more but we highly recommend as it is far, far easier to use).

The Float Table glides up and down smoothly, without any of the coffee sloshing you get from trying to rapidly adjust a crank desk. It's also a quiet affair, without any of the noise that comes from grinding gears. It has a relatively low adjustment range of about 28" - 48" which, while within the ANSI/BIFMA standard for adjustable height desks, may not be suitable for taller users of around 6'2" or higher, or of average-height users on an office treadmill. Many desk manufacturers are already seeing the value of exceeding the ANSI/BIFMA standard, and desks like the the iMovR Energize XT and Lander can reach up to 55" with their leg extension options. So we're a little disappointed at the Float's rather banal height range.

Also disappointing is the exceedingly low weight capacity of 130 lbs. We're used to seeing crank and electric-operated desks that can lift upwards of 350 lbs., and the Float seems like a weakling by comparison. That kind of lifting deficiency is to be expected with a counterbalance system, so it's the price you pay for this gliding table—well, that and $1,499.

Function comes first, but form isn’t far behind. The Float Table’s polished aluminum and steel body would do any office proud. Humanscale offers five laminate colors for table top finish, which all speak to their modern aesthetic. Select from White, Gray, Platinum, Tan, or Black. A range of desktop size options are also available, between 48" and 72" in width and 24" and 30" in depth.

As you can read in our in-depth engineers' discussion of What Makes Some Standing Desks Shakier Than Others, a two-legged desk is an inherently unstable affair, with a wide spectrum of quality to be found between the cheap Chinese imports (generally quite shaky) and the premium domestic brands (the least shaky, generally speaking). But if there's anything the FloatTable's heavy metal base has going for it it is its astounding stability. To get this much stability otherwise you'd have to upgrade to a four legged sit-stand table.

A Few Bumps in the Road

The Humanscale Float Table looks great on paper, and the first time we tried one at a trade show was magical. Which was why we were disappointed when some forensic analysis of customer comments online informed us that units were arriving damaged due to shoddy packaging. But, we really liked the concept of the Float, and there really is something magical about them once they're set up and working properly. Those problems were all reported in 2013/2014, but not recently. We kept a closereye on the product to see if Humanscale could turn things around. After some careful review of the evidence, we can once again highly recommend the Float Table to our readers. Humanscale appears to have improved the manufacturing quality control and delivery process of this adjustable height desk, bringing it in line with Humanscale's otherwise stellar decades-long reputation for quality and service.

The Float Table comes with a very solid 5-year warranty and 24/7 support from Humanscale.

Free shipping to the continental US from SitLess. Lead times of four weeks is typical for Float Table shipment. This is a product that tends to generate large fleet sales for Humanscale on occasion, so delivery times tend to be unpredictable as their production line copes. If you're thinking of placing an order, we recommend calling first to find out how delivery times are at that point in time. They can range from two to eight weeks.

Humanscale offers numerous options for customizing your Float Table, from different colors of bases and tops to four different base sizes and eight different top sizes. Build your own at the WorkWhileWalking online store to calculate built cost on the fly. 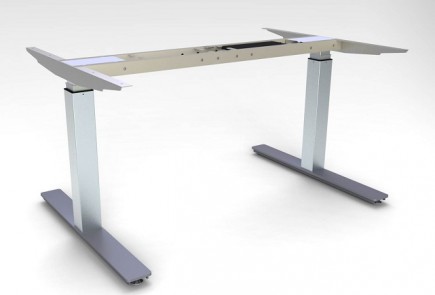