3.5
The Notadesk Elsewhere doesn’t stack up to a standing desk in terms of ergonomics or stability, but it isn’t really trying to. Its ideal use is found as a small, portable standing workspace that you can set up just about anywhere.

With a lectern up top and tripod down below, the Notadesk Elsewhere design is easy to dismiss at first glance. But after using it around the office for a few days, we were intrigued by what we saw.

The top surface is made from bamboo and has a small lip on the bottom to stop your work items from slipping off. The maximum height for the bottom edge of the top surface is 57”. It’s angled and, while the angle feels fine, one of our biggest issues with the Elsewhere is that you can’t change this angle from the top surface itself. You can change the tilt by manipulating the individual lengths of the legs, but that’s not a very convenient solution and therefore not one people are likely to make often.

The top surface is 18-3/4” x 13-1/8”, which is big enough for a laptop but not big enough to have a laptop and use an external mouse with ease. Notadesk does offer an extended mouse pad to solve the issue for about $8. The mouse pad is 6” x 6” and made from rubber and cork. The surface is designed to be non-slip since your mouse will need to stay on it at an angle. One side of the mouse pad is a wedge and it’s designed to fit between your laptop and the top surface of the Elsewhere.

We didn’t test this accessory so we can’t say for sure, but the design doesn’t look overly sturdy, so we’re not ready to call it a fix for the narrow top surface, even though it is a very cheap add on. When we first set the Elsewhere up, our immediate concern was about stability. It’s so light that it feels dangerous to put your laptop on it but once you do put a laptop on the top surface, it feels better than we expected. Just by the nature of the design, it will definitely tip over if you bump it or trip on one of the legs, so you’ll want to be careful and we suggest not leaving your laptop on the stand if you’re not currently working.

You can improve stability by hanging a bag or something else by the hook that hangs down in the center of the tripod. You can also put sandbag weights on each of the three tripod legs to assist with preventing tip-overs. This would be a good idea especially if you have small children or pets around.

The ends of the top surface do move up and down if you apply force because of some flex in the tripod legs themselves, but this isn’t overly distracting because we weren’t able to use an external mouse anyway and pressure from typing was in the middle of the surface.

The Notadesk Elsewhere has obvious ergonomic shortcomings. Without a descending keyboard tray or the ability to attach an ergonomic monitor arm, you won’t be able to create sufficient vertical distance between your keyboard and monitors so you can work without craning your neck down to see your screen.

That’s OK for a little while and no worse than using the laptop on its own at a fixed-height desk—at least this device gets you standing. But users should realize that because of the way our bodies are built when we stand our lower spines stretch out, so the distance between eye level and keyboard level increases a bit and that means even more craning to glance down at the screen.

There’s also the issue of tilt. A negative tilt (bringing the edge of your keyboard that’s closest to your body up) is essential for relaxing your wrists while typing and creating a neutral position that won’t cause injury over the long term. The Elsewhere can’t provide a negative tilt* and actually has a positive tilt, so it’s not for extended typing.

*By using the Elsewhere’s top surface backward, you actually can achieve a negative tilt, but using it backward would put your laptop screen very far down and cause neck problems.

Because of these issues, we can only recommend this product for short-term laptop use. 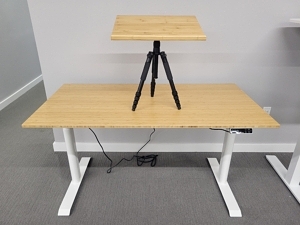 ⁣The Elsewhere being used as a standing desk converter

Notadesk calls the Elsewhere a mobile standing desk, but we found a use for it as a standing desk converter as well. You can set it on a table or fixed height desk and have an elevated work surface very quickly.

Even though we talked about ways the Elsewhere comes up short of a standard standing desk above, this is really the most important aspect of the device: it’s a small, portable (it weighs less than 7 lbs) work surface. It is not an actual standing desk (unsurprisingly, from the company’s name) and it doesn’t attempt to be one.

If you are a light laptop user (not much typing and not much use of an external mouse), this is the only solution we’ve seen that allows you to quickly pack up and go outside to work or go to a different room to work for a bit. In that way, we found the best use to be in conjunction with our standing desks. When we wanted a change of scenery for a bit, we’ve used the Elsewhere to go to a different spot and work. When we wanted to do the bulk of our work in an ergonomically-tuned environment, we came back to our standing desks.

For someone who has never tried a standing desk and isn’t overly concerned with ergonomics, this device would be a great introduction to standing while working.

The Notadesk Elsewhere has flaws. Even after using it for a while, we were still leery of our laptops getting knocked off if someone bumped into it, and it isn’t suitable as your sole work surface in a single position for a long period of time.

Our favorite spot to use it was actually next to our standing desk as an extension of sorts. Then we would pick it up and move it quickly if we want to work in a different spot. We also enjoyed using it as a work surface for writing notes while working on another standing desk. It’s kind of hard to imagine all the ways a small, portable work surface can be helpful until you’re holding the Elsewhere and moving it around. At a park, by your couch, in front of your bike while it’s on the trainer, etc. An artist can use it to hold a sketch pad, and anyone can use it to hold a tablet. The ideas just keep flowing.