How a Treadmill Desk Helped Me Win More Chess Games

Academic studies of treadmill desk usage have collated metabolic metrics on everything from cholesterol, triglycerides, and A1C hemoglobin (blood sugar) to blood pressure, caloric burn, and even weight loss, but meaningful measurements of productivity improvement are much harder to devise. We know of one study currently being undertaken by the University of Mississippi to measure core employee productivity – looking at work hours and absenteeism among employees with chronic back pain and other issues, for example – which will certainly stand on its own in any employer’s ROI analysis, and we look forward to seeing the results of the completed study.

But the other kind of productivity, or “focus improvement” – which should be evident when an employee switches from a sedentary to an active position (i.e. standing or walking) – is far tougher to measure scientifically. To date, we’ve not heard of any large scale studies being done to measure the productivity boost resulting from increased oxygen flow to the brain. Sitting down for prolonged periods of time signals our caveman DNA to store more calories as fat and lower our metabolic rate since we’re not on the hunt. Standing or walking reverses this slowdown, so we should be able to measure the resultant effect on worker productivity, right?

Well, real world productivity can be really tricky to measure. Coming up with a single laboratory test to determine how much more productive an actuarial analyst or health care administrator is going to be if she does her job while on a treadmill desk instead of a chair is a tall order indeed. I’ve been able to observe my own productivity improvements anecdotally for almost as long as I’ve been using a treadmill desk, going on six years now – but that hardly qualifies as proof. I decided to come up with a semi-scientific study – using yours truly as the subject – just to prove it to myself and my co-workers, if no one else. My favorite pastime these days is playing chess online. In particular, “blitz” chess against not only your randomly-selected international opponent, but against a two to five-minute clock. After a hiatus from playing of some twenty-five years, I found my two sons both getting really into it, and regularly picking up handsome trophies in local and state-wide chess tournaments. Pretty soon my (obviously gifted) 11-year-old was beating me on a regular basis. I had to start improving my own chess skills to keep up with him, so I found some free sites where I could play against similarly ranked individuals. My goal wasn’t to become a grand master, just to stay far enough ahead of my sons to keep them challenged, and to retain some modicum of dignity for myself.

Over the past couple of years I’ve noticed anecdotally that whenever I play online chess sitting down I may win the first couple of games but I soon go into an inexplicable losing streak. Yet when I play while walking on my treadmill desk I tend to do much better, and almost always step off the deck with a higher ranking than when I stepped on. As the staff here was kicking around ideas for how to measure productivity enhancement on a treadmill desk, it hit me: why not measure what happens to my win ratio and overall ranking when I play sitting versus walking? You don’t get many opportunities to turn your hobby into your job, so I was eager to start measuring my own real-world statistics.

Following our own advice at WorkWhileWalking, I used a pomodoro timer to force myself to take a mental relaxation and stretching break every 25 minutes – whether sitting or walking – and I kept each session limited to no more than one hour total. After three hours of playing seated and three hours playing on the hoof, I wasn’t surprised to see the statistical advantage go to the treadmill desk. I was positively floored, however, to see just how much better I did when walking. 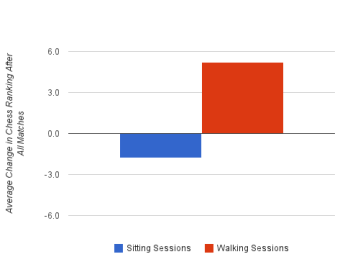 As the data show, my win ratio improved from 7 out of 19 games (37%) to 13.5 out of 16 games (84%) when I switched from sitting to walking. My average ending rank went up 5.2 points after walking sessions versus down 1.8 points after games played while seated. Games played while walking went a little longer – an average of 8 minutes versus 7 minutes. Online chess games come down to which players makes a fatal error sooner, so the shorter game times while seated may imply that I was the competitor who made the first fatal mistake more often.

I joke with friends that working on a treadmill desk is like living in Seattle – we have our rainy-day list of to-dos, and our sunny-day list of to-dos that we subconsciously sort out. Same thing on the treadmill desk – we have our tasks we’re saving for the next walking session and others we’ll tackle when we’re sitting. From now on I’m going to save tasks that require more focused attention for my walking sessions, and set aside the more brain-dead tasks for when I’m sitting.

Studies have shown that walking causes us to focus our thinking more, making us less susceptible to distraction by stray thoughts (and hence one reason treadmill desks have proven to be excellent tools for people who suffer from some degree of attention deficit disorder). This alone can explain, at least in part, the dramatic difference in my win ratio playing 2-minute blitz chess matches. When seated I seemed to be much more inclined to hum along with the background music or respond to incoming email popping up in the corner of my screen. I’ll more frequently lose matches by running out of time when playing seated, yet only rarely when playing while walking.

We’re curious what other methods our readers may have come up with to measure the impact of treadmill desking on their productivity, whether professional or casual? Let us know, and in the future we’ll take the best of these ideas and try to get a university to put together a more formalized study.

10 Ways To Improve Your Office Ergonomics