August 21-25th the longest-running and largest ergonomics event in North America was held at the Paris hotel in Las Vegas. Each year ergonomists, manufacturers, and institutional buyers from all over the world congregate at ErgoExpo to attend seminars, network with like-minded professionals, and walk the booths of the Expo Hall—where the most cutting-edge ergonomics products are on display from a variety of vendors. Each year our editorial team attends as well, to hear thought-leaders discuss the field of ergonomics and to get a head-start reviewing the latest office fitness products (many still in the prototype phase).

Over the years, the show has transformed, reflecting a shift in the industry’s landscape. A look across the Expo Hall several years ago would reveal a sea of ergonomic office chairs festooned with adjustment levers, with just a few islands of ergonomic desks, keyboards, and mice on the map. Now, while there are still a fair number of chairs, standing desks have taken over as the main attraction. The message has been absorbed by ergonomists and product manufacturers alike that sitting all day is a root cause of our office culture’s health problems, and standing desks offer at least a partial solution.

While we at WorkWhileWalking and WorkWhileStanding are encouraged to see this trend, there’s still a long way to go towards making office environments truly active (standing after all is still a static position). Walking the booths this year though, we were impressed with the number of devices designed to keep your body moving at work—whether you’re sitting or standing. Here’s a recap of some of the best (and worst) we saw: Varidesk, the original popularizer of the standing desk converter, displayed their assortment of manually-adjustable devices at the show this year, which all stick to their original spring-loaded locking mechanism with 11 height presets. The once innovative product line now pales in comparison to new designs with better lift mechanisms and stability, but it continues to sell extremely well due to its established market share and extraordinary advertising budget. Of course, we’ve already reviewed the Varidesk products in detail, and you can read more about them in our in-depth take and evaluate the best alternatives.

Roughly a hundred models on the market now compete with Varidesk, and some late followers entered the fray for the first time at the show this year. Ergotron, the maker of the WorkFit series of standing desk converters, showed off their newest converter, a version of the WorkFit-TL called the WorkFit-TLE that incorporates a lowered keyboard tray and a document holder. DeskRite demonstrated a model with a similar design to the TL, but it includes a knob for adjusting the lift tension so you can be sure not to strain your back when you lift the unit up. Loctek, a prominent Chinese manufacturer of monitor arms among other devices, displayed their FlexiSpot Standing Desk Converters, which now are even easier to assemble (no need to bolt in the keyboard tray). iMovR brought both their Cadence Express (a hover style unit excellent for shared workspaces) as well as their popular ZipLift+—one of the only devices on the market with a tilting keyboard tray for optimal typing ergonomics—which also now comes with a free portable standing mat ($50 value) bundled with each unit. A new brand, Eureka Ergonomic, showed off several models with impressive stability and functionality, highlighting their advanced manufacturing techniques. We’re still convinced that manual lift standing desk converters make the most sense for the majority of people, mainly because they’re cheaper and lighter weight. But this year we saw more electric lift converters at the show than ever before. If standing desk converters follow the same path of development as full blown standing desks, which also began as manual lifts, more and more will turn electric until nearly all lift at the touch of a button. We’re not quite there yet. Most electrically powered standing desk converters are still prohibitively expensive—fit only for executive offices with solid oak desks that can’t easily be removed. It’s hard to imagine a large corporation splurging to outfit their office space with electric converters when less expensive manual options get the job done just fine. The Autonomous SmartDesk Mini on display at Ergo Expo 2017, a hasty attempt at a ‘budget’ electric converter

But as we walked the booths this year we not only saw established electric converters like Innovative’s Winston-E and Ergo Desktop’s Electric Kangaroo (now with the up/down button at the front of the desktop for easy access), but also new, ultra-cheap, imported electric converters that have come out of the woodwork. Most are just prototypes at this stage, but a few have been rushed into production with no better example than the Autonomous SmartDesk Mini, whose designers, in the rush to market, failed to realize that monitor height should adjust independently from the work surface to accommodate both sitting and standing. Another rookie mistake we saw had a monitor pole about six inches too short for a normal user (it’s not uncommon for Asian engineers to fail to realize how tall the average American or European can be).

We don’t doubt clever engineers will soon overcome these design dilemmas and pave the way for electric converters to enter the mainstream, but until they do, for the cost sensitive consumer it’s still a better bet to get a tried and true manual lift with solid ergonomics.

Active Gear for your Feet

We’ll put a variety of products in this category, including bike desks, balance boards, and any other device designed to keep your feet moving while you sit or stand at work. And there were plenty of them. Here are some of the most exceptional. 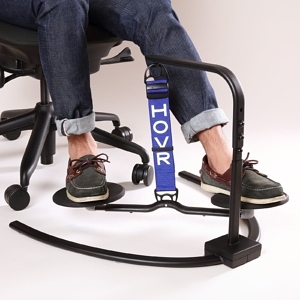 HOVR Active Office Footrest, also available in a version that attaches to your desk

In the balance board camp comes FitterFirst, a balance board with an impressive range of activity level. Velcro strips underneath allow you to attach four foam pads in different positions for varying levels of difficulty, from easy to quite difficult. An inexpensive price tag ($99) makes the product especially appealing to those buying their first balance board.

Officiser was at the show again this year, an active footrest designed to mimic the motion of walking while you’re seated—all while keeping your upper body stable. The foot rests move independently, roll 360 degrees for fidgeting, and glide along short paths to keep your feet and ankles limber as you work during the day.

Also in the active footrest category is the HOVR, a product that allows you to swing your legs back and forth while you sit at your desk. Two different models are available. One attaches to your desk and the other rests on the floor, but both allow you to burn about 20% more calories than sitting, are NEAT™ Certified by Mayo Clinic, and put very little strain on the joints.

And there’s the Foot Fidget, a product developed by physical therapists that has been marketed primarily to school systems in the past but has a wide application, including the office setting. These devices also come in two varieties, one that attaches to the desk and the other that rests on the floor, but the key difference from the HOVR is that the Foot Fidget has resistance bands that encourage you to press against them, giving your leg muscles a little attention while you sit. Flexispot Deskcise Pro, a bike desk that can double as a standing desk Bike desks have been around for some time, and we’ve written a round-up of them, along with their close relatives the desk cycles. This year Loctek introduced two new bike desks under their Flexispot brand, the Deskcise Pro, which is an all-in-one bike desk including its own work surface for your laptop, and the U2 model that lacks the work surface and is designed to be incorporated with a full-blown standing desk (like the Lifespan C3). We must say from a stability standpoint, the bike that uses the rock-solid surface of an external standing desk is much better off, but the Deskcise Pro can serve a purpose as well, perhaps as an addition to your living room where you can get some serious multi-tasking done, cycling, casually working, and watching tv at the same time.

This year—like last year—only one treadmill desk manufacturer attended the show and that was iMovR. Lifespan and Steelcase were conspicuously absent, leaving iMovR as the sole evangelist for the walking workstation. They showcased their new made-in-America standing desks with their state-of-the-art ThermoTread GT Office Treadmill. The iMovR Elevon, the first keyboard tray to bring SteadyType™ ergonomics to every desk, shipping in September

iMovR also demonstrated their SteadyType™ keyboard trays, both the built-in version as a part of the desk tabletop and their new Elevon Keyboard Tray for standing desks, the first keyboard tray that attaches to any standing desk in less than 30 seconds. These tilting keyboard trays still lead the charge in re-defining ergonomics for the age of the active workstation. By more closely emulating neutral arm and wrist positions, SteadyType™ makes typing and mousing at a standing desk or walking desk less straining, more comfortable, and more productive. Ergonomists who flocked to the Elevon were ecstatic to finally see a keyboard tray that fits sturdily on a standing desk, and with its SteadyType™ angle adjustability, several praised it as one of the few ‘truly innovative’ products at the show, and were glad to hear it passed the prototype phase and is shipping in late September. Safco’s Confluence Sit-Stand Table, with dry-erase board surface for drawing diagrams (or doodling) The Focal Collision Table, with hooks for hanging your Focal Mogo stools Mobis II Stools, in a variety of colors to match your décor

Safco attended the show again this year and brought their Focal Collision Table, a mini conference table for small meetings, with hooks underneath the tabletop for hanging your Focal Mogo Seats. The tabletop’s surface, like on their Confluence Sit-Stand Meeting Table, doubles as a dry erase board, so you can draw process flow charts without getting out of your seat, or doodle to your heart’s content during long meetings. They also showed their Mobis II stools with an upgraded Tri-Flex Seat Cushion that has built-in sitz bone contours for plush support and a waterfall edge to reduce pressure on your legs. Evoluent displays their ergonomic vertical mice, the VerticalMouse 4 and the C-Series

Evoluent, a maker of ergonomic mice, brought their assortment of vertical pointing devices, including the Evoluent VerticalMouse 4 and the Evoluent VerticalMouse C Series (a newer model shaped like a backwards letter ‘C’). The idea behind these mice is that holding your mouse vertically allows your wrists to rest in a more neutral, non-straining posture than holding your mouse horizontally. To visualize, think about how your hands rest naturally at your sides when you stand, with palms facing your body. When you use a vertical mouse, you take this same wrist position up to your desk, eliminating potential strain in your wrist joint and tendons during the day.

Other returning companies included Kinesis with their ergonomic “split” keyboards, Conset America with their broad line of standing desks, Interstuhl with their perching stools UPis1, and BackApp, a designer of an active seating solution and a balance board, the BackApp 360.

Signing Out from Las Vegas

Walking the booths of the Expo this year, what stood out to us most was the wide assortment of standing desk converter models, a sign these budget sit-stand solutions will continue to enter the market in droves over the coming years. We look forward to testing and evaluating more of the best products at the Expo over the coming months. Sign up for our newsletter and you’ll be the first to read our new product reviews and advice articles. Until next year.