3.5
If this unique shape sings to you, and works in your available office space, the Curved Corner is worth your consideration. But you'll have to get over the shortcomings of its one-size-fits-all desktop that comes in only very limited finishes.

We’ve reviewed all of the UpLift desks from The Human Solution, including their popular two-legged, rectangular-topped UpLift desk and all three of their three-legged, L-shaped desks. This particular variant, though, technically falls into the category of a corner desk (as opposed to an L-desk) because the desktop consists of a single piece of lumber, not two. (Read our primer to learn more about the differences between corner standing desks and L-shaped standing desks.)

The desktop shape on this “Curved Corner L-desk,” as UpLiftDesk.com refers to it, is more commonly known in office furniture lingo as a “pork chop” style. At least in terms of corner desks that you can buy online it’s fairly unique, though in terms of popularity among standing desk offerings it is probably the singularly least popular shape sold. If it happens to fit your particular office space and your taste well then it might be a real find, but fair warning… odds are far greater that you’ll want more options for sizes, colors and desktop materials than are offered in this line.

Like all the other UpLift desk models, the Curved Corner unit is built atop a low-cost, Chinese made base. We’ve lab tested the Jiecang and identified certain issues that affect all of their desk models (and competitor Fully, whose Jarvis desks are built upon the same Jiecang base with minor differences). However, stability and lift capacity issues will be somewhat diminished in this desk rendition due to the fact that it incorporates three lifting columns instead of two. So although the base is a little less costly than a high-quality American-made standing desk base, you’ll in effect be paying 50% more for a third lifting leg.

The shape of the UpLift Curved Corner’s desktop is unique in every sense of the word. Unlike most corner standing desks and even UpLift’s own diverse offerings in their traditional L-shaped desks (each employing two desktops that are mounted perpendicular to each other), the Curved Corner is a single desktop slab that comes in only one size. It runs 72″ along one wall and 47″ along the other.

In terms of desktop material/color options there are only four, again a very limited offering given UpLift’s penchant for desktop options on their other products. This desk can be ordered with what UpLift calls an “Eco” top—which is basically spray painted in black or white (“powder coated”)—or in bamboo or rubberwood. Be sure to read our Guide to Desktop Materials for Standing Desks to learn about the differences between these three Asian-sourced materials and processes for making desktops.

The nice thing with all three of these inexpensive materials is that they can be ergo-contoured; UpLift adds a nice bevel along the user edge for comfort when leaning your arms against it, and they look nice, too. The downsides are primarily environmental and poor durability. This is particularly in the case of bamboo, which UpLift touts for its environmental benefits when in reality bamboo is the most environmentally devastating material to make a desktop out of.

In general this online seller is known for “green washing” what are either standard commodity materials that just about every manufacturer in the industry uses, like MDF, or play a slight of hand in terms of hiding any information related to their country of origin. The durability of powder coat paints, and the adhesives and laminations used in converting bamboo grass to a desktop slab have a dubious track record at best. To keep prices low, UpLift has opted not to offer HPL or domestic natural wood options on the UpLift Curved Corner desk line.

Since we’ve already covered all the other controller, motors, actuators and other technical details in our reviews of the standard, two-legged uplift desk and all of their L-desk models, we’ll leave the reader to check those reviews for the basics and focus here instead on the differences between the UpLift Curved Corner and these other UpLift desk models. 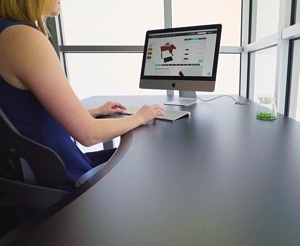 Compared to their popular two-legged desk, which also comes in a 72″-wide version, this three-legged variant allows one end of the desktop to grow from 30″ to 47″. As seen in their product photography one would envision most users placing their computer monitor into the deep corner. One reason that these pork chop desks aren’t as popular as they used to be is that computer monitors aren’t deep anymore, they’re flat and from an ergonomics standpoint you want them to be only about 20″ from your eyes .

The big ergonomic downside to the shape is that you want to keep your shoulders back as much as possible to avoid “computer hunch.” The curved inside edge where the keyboard would naturally go would be set further back from the user than if the desk had a conventional straight front edge. Mounting an under-counter ergonomic keyboard tray is also a challenge with this curved user edge, and frankly a non-starter for a number of reasons.

Unlike some L-desk designs and other corner desks that are symmetrical, the UpLift Curved Corner cannot be “flipped” from left to right orientation, so it has limited versatility should you move to another office or want to change the layout of your current office.

The Curved Corner L-desk represents a lot of compromises in the name of reduced cost. Instead of two desktop pieces it uses only one, but isn’t symmetrical like most corner standing desks, and requires three legs to give it sufficient support. From a value standpoint that leaves the Curved Corner pricier than two-legged models like iMovR’s Energize Corner Desk (which come in a great variety of sizes and 16 colors), and far less versatile and capable than any true L-desk, like those made by UpLift, Fully and iMovR. Learn more about how these L-desks compare to each other in our comprehensive L-Shaped Standing Desk Reviews.

TheHumanSolution (the brand behind UpLiftDesk.com) has been around almost as long as anybody in the standing desk business, and they’ve had many years to create all these different desk models off the same Jiecang base, by changing the desktops along with the configuration of the lifting columns. With the UpLift Curved Corner L-Shaped Desk they seem to have indeed “covered every corner” (pun intended). It may not be a very popular option due to its limitations but at a $999 starting price it may appeal to some users who can deal with the footprint and limited decor options to save some money as compared to a true L-desk, where starting prices are typically $1,200 to $2,000.

We have the same concerns with the Chinese-sourced components of this desk as we do with UpLift’s others, as we’ve detailed in the other models’ reviews many times. But given the uniqueness of this product’s shape, if it sings to you it’s probably worth serious consideration.

To learn about other offerings in this category see our comprehensive round-up of Standing Corner Desk Reviews. If what you’re really looking for is probably an L-desk check out our L-shaped Standup Desk Reviews.