When standing desks first began to appear on the market they were predominantly two-legged, rectangular-top affairs. Corner denizens were neglected by most manufacturers. But as the industry continued to mature more and more options in active workstations for corners and cubicles began to appear, and we’ve got conducted full reviews on all of the ones you’ll find commonly sold online. In fact there were so many of them we had to break this category up into two subcategories of “corner standing desks” and “l-shaped standing desks.” 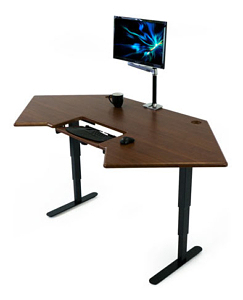 Corner desks differ from L-desks in having only one desk surface instead of two, and often only two lifting columns instead of three (saving 50% on the cost of the base).

This is another one of those instances where the industry can’t agree on standard definitions. Some desk makers call their standing L-desks “corner desks,” while others referred to them as “L-shaped standing desks” or simply “standing L-desks.”

The main difference between the two categories is that corner desks are significantly less expensive, due to the fact that they usually (but not always) have only two electric lifting columns instead of three, and only one desktop instead of two.

Corner desks can often be laid out in creative patterns in an open workspace. Some corner desks also have a chamfered back corner, for all sorts of reasons that we cover in detail in our review of iMovR’s corner desks, including the ability to create really cool workspaces with dual, quad and even honeycombed layouts.

Corner desk limitations, however, are their maximum size and lift capacity. A three-legged L-desk can get up to larger sizes and of course has 50% more lifting capacity. L-desks are much more popular for replacing fixed-height L-desk countertops in larger cubicles.

The L-desk category has been seeing a lot of new innovation lately, and choices in sizes, colors and desktop materials—from 3D laminate to real wood—are bountiful. Learn about all of them in our comprehensive round-up of L-Shaped Standing Desk Reviews. Or click here for our Corner Standing Desk Reviews round-up.

Acquiring the best standing desk for your decor, budget and performance requirements is Step One. But making it a true ergonomic workstation involves adding the appropriate accessories you’ll need to keep your body in a correct posture, and have a neat and tidy setup. Check out our comprehensive guides to monitor arms, keyboard trays, anti-fatigue mats, ergonomic seats, cable management kits, power management modules, foot rests and under-desk treadmills for both expert advice and lab-tested product reviews of options in each of these categories.

Need more help? Read how to find your correct desk height, then check out 10 ways to improve your office ergonomics and answers to the most common standing desk questions.