A Modern Redesign of a Timeless Classic
Overview
Review Summary

“If it ain’t broke, don’t fix it.” That was HÅG's philosophy when they updated their venerable Capisco chair, first introduced about 30 years ago. The result is the Capisco Puls, a modern office chair that preserves the ergonomic and active-seating benefits of the original, but with a refreshed, streamlined aesthetic and environmentally sustainable manufacturing practices better suited for the 21st Century. Its elegantly sculpted seat back and saddle seat promote flexible sitting habits that give you the freedom of movement, even sitting down.

Delivery in 7 business days from order

A masterpiece of office furniture design. HÅG's Capisco Puls, despite its minimalist aesthetic, still provides a comfortable and ergonomically healthy sitting experience. With a multitude of sitting positions available to users, the Puls always feels fresh.

While still a comfort to use, the Puls isn't as heavily padded as the original Capisco. Some users might find the seat back a nuisance to their shoulders.

We were initially skeptical about HÅG's new Capisco Puls when we first saw it. We were unsure whether the padding would be sufficient for a rejuvenating sitting break, and the seat back's protruding parts looked like a recipe for back pain. Not only that, but in a category dominated by leaning- and active chairs like the Back App and Mobis, the Puls in comparison seemed too close to conventional, ergonomically-flawed office chairs that only encourage you to sit more, and in one position.

After several weeks of trial, however, you can now consider us true believers. We're impressed with how well the seat back was designed with just enough flex and shaped to comfortably accommodate a variety of different users. We definitely recommend the upgrade to the fully-upholstered model; the full seat pad was just right and we think any less would be more of a distraction to your work than anything else. The Puls's flexibility – particularly when it comes to the multiple sitting positions – doesn't feel like an afterthought, but rather an integral part of its design. With the level of freedom and reliability it offers, the Capisco Puls has earned our expert recommendation.

Thirty years ago, Norwegian industrial designer Peter Opsvik, in association with office seating manufacturer HÅG, designed a new office chair with a seat ergonomically modeled after the posture one finds oneself astride a horse, called the horseman's posture for short. The Capisco was more than just a saddle seat, however. Opsvik, an industry legend who also created the classic Balans kneeling stool, designed the Capisco to facilitate a variety of sitting postures throughout the day, allowing users a freedom of movement that at the time was unprecedented in office chairs.

Now, HÅG has taken Opsvik's design back to the drawing board and created something modern for today's offices. The new Capisco Puls is a sleeker, greener, and more affordable ergonomic chair than the older model, with a refined saddle seat and a minimalist aesthetic. Can this redesign win over a new generation of office workers? With the new chair in our testing labs, we set off to find out.

Compared to the more complex task of putting together a desk, chairs are a breeze to assemble, and the Capisco Puls is no exception. There are only four main components to contend with: the seat, the back rest, the gas lift, and the feet. They're lightweight and easy to set up, with clear instructions and a minimal number of bolts to attach. The new Capisco Puls made waves with its bold redesign, winning the coveted Red Dot Design Award in 2011. It retains the same basic elements of Opsvik’s original concept, but with a pared-down design. The seat and back rest of the older model, which featured a liberal amount of padding, have been streamlined for the Puls with molded polyurethane and sleeker angles. The ergonomic saddle seat is still a mainstay of the Puls, though it too is an update of the original: The saddle sports a slimmer, more subtle "pommel" than the first Capisco's more pronounced shape, and looks somewhat similar to the Focal Mobis's seat. In keeping with its minimalist aesthetic, the new seat is mostly bare: the only cushion on the basic model is a thin strip of padding down the center of the seat pan.

For our review, we tested the upgraded, fully-upholstered model with 1/2'”-thick upholstery covering the whole seat pan. Its components are mostly gray, with an aluminum frame—combined with the curved seat back, it looks like the ergonomic seat of choice aboard the Starship Enterprise. If you're not a Trekkie, never fear: the Puls also comes in black, red, and blue gray. The base is available in black or silver. Despite the reduced cushion factor, the Puls's saddle seat remains adequately padded—at least on the fully-upholstered version—and slopes gently, positioning your legs in an ergonomically healthy angle. The seat back is likewise shaped to accommodate your spine: cutouts afford your shoulders a hefty amount of freedom to move, while the seat back's rounded 'arms' give you a place to rest your elbows. We're not sure we'd try this position, but this photo gives you an idea of the variety of postures possible in the Capisco Puls.

Unlike 'active' seats like the Back App, which automatically engage your core and back muscles, the Capisco Puls still resembles a static, traditional office chair. However, the Puls offers a different kind of movement. One of the original Capisco's most interesting attributes, which HÅG has preserved in the Puls, is its ability to support a wide variety of sitting postures. A quick skim through the Capisco site revealed photo after photo of people sitting on the chair in a variety of positions – facing sideways, or even using it backwards. We raised our eyebrows at a few of these pictures (some of them depicted what could only be described as "chair yoga"), but we have to admire the Puls's dedication to activity and freedom of movement. We tried some of these oddball positions out, and were surprised at how well they seemed to work. Sitting sideways feels natural to the body, as does sitting backwards with your elbows propped up on the arm rests. While the process of changing positions on the Puls isn't as instantaneous as an active chair, we still think everyone can benefit from a little chair yoga – no word yet on how our chair chakras are doing, though.

The Puls has the adjustability features you’d expect in an office chair. Height, seat pan depth, chair tilt, and back rest height are all adjustable. The base's grooved foot plates are a natural place for your feet, more so with the optional foot ring or StepUp Footrest, which provide different places to rest your feet while you sit. While other, so-called "ergonomic" chairs may come with a wide array of knobs and levers to adjust every minute little detail, we found the Puls's basic adjustments, paired with the freedom of movement it affords us, provided a more satisfying sitting experience than its conventional counterparts.

The chair's redesign is not only attractive to look at and ergonomically designed, it's also environmentally responsible. The Greenguard-certified Capisco Puls is specially built for minimal environmental impact: it's 95% recyclable, made with few chemical emissions and 24% post-consumer recycled materials – it incorporates used plastic parts, and its foam cushion is made from recycled car bumpers. These environmentally-sound efforts make the Puls a natural fit for 'green' offices. The Puls comes with a strong warranty. The height-adjusting gas lift is warrantied for life, the frame for five years, and the seat pad for three. Most of the products we review—thankfully—don't break down during our testing, so we rely on the manufacturer's warranty to gauge how durable a product is. And Puls's warranty assures us that HÅG designed it to last. 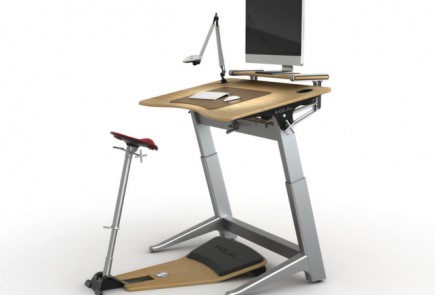