The Sculpt is a million miles away from its Natural 4000 predecessor, both functionally and aesthetically. Many users will find the redesigned keyboard a joy to work with, and the accompanying mouse and num pad are also well-made. It has become one of the office favorites at our test labs, especially for those who are looking for the ergonomic features without having to totally relearn how to use a keyboard. However, like its predecessors and unlike competing products such as the Freestyle2 from Kinesis, the Sculpt is strictly one-size-fits-all.

Sleek, futuristic, and ergonomically upgraded, the Sculpt represents a giant leap forward for Microsoft’s line of keyboards. Many of the shortcomings of the last-gen Natural 4000 have been addressed, and some new features have been thrown in. A solid mix of form and function, the Sculpt is a welcome addition to any ergonomic workspace.

The Sculpt’s primary fault comes in the form of occasional durability problems. Enough users have complained to prompt a Microsoft investigation into the issue. A lack of negative tilt and keyset separation adjustability is also an issue that ergo purists might object to - though ordinary office workers will likely love the Sculpt as it is.

Two things often come up in reviews of the Microsoft Natural 4000.  First, many found it to be an excellent ergonomic keyboard, and second, practically everyone thought its styling was hideous.  You’d be hard pressed to find any such knocks against the Sculpt, a beauty queen born from a historically homely lineage.  The wingform contour of the board won it the codename “manta ray” while in development, an accurate moniker if there ever was one.  The dull matte finish that was mocked on the 4000 is no more. Glossy black plastic gives the Sculpt desktop an extra bit of aesthetic oomph, though like any glossy black plastic, fingerprints appear on it with forensic accuracy so be prepared to do some polishing.

Microsoft listened to complaints about their preceding keyboards over the past twenty years, especially over the last 7 years since the Natural's debut.  The inclusion of a full numpad on the Natural was a major ergonomic violation, as it forced users to stretch to reach their mice.  Instead, the Sculpt has a separate numpad, allowing a mouse to inch a little closer to the board.

The hated single-piece space key of the Natural is gone as well.  The Sculpt uses a split space key, which actually fires every time it’s hit – already a major improvement.  The rest of the keys are flat and chiclet style, similar to what you’d find on a laptop.  They make use of scissor switches, which are bouncier and more “clicky” (in terms of feel, rather than sound; Sculpt keys are relatively quiet) than those of the Natural.  It was an excellent design choice – the Sculpt is definitely fast-typist friendly, and has a much better tactile presence under the fingers.

Unfortunately, not all the keys have the same mechanism.  The function keys are actually buttons, which require more pressure to activate, and tend to be sticky.  Additionally, instead of a toggle key for secondary functions (volume, pause/play etc), Microsoft decided to use a switch on the top right corner.  Users who primarily use the toggled function keys won’t mind, but anyone who has to use both will – programmers in particular have found it irritating.

The accompanying mouse has caught some flak from Amazon reviewers, but we found it to be an excellent product, albeit with a couple of caveats.  A dome shape makes it fit nicely in the hand, once you’re used to it, and the thumb channel makes it very obvious how it should be held.  However, users with larger hands may find the mouse undersized.  Microsoft also hasn’t shown much love to the lefties, who will want to plug in an additional mouse.  However, we did like that both the mouse and the keyboard (and a separate numpad) were all linked to the same wireless dongle, which conveniently stores inside a compartment in the mouse.  The angling has been done very nicely – the Sculpt mouse brings the hand about halfway between the traditional flat mousing grip, and the “karate chop” grip used with vertical mice.  It makes for a comfortable, ergonomic device, and one that’s much easier to adapt to than fully vertical options. Of course, left-handed users and those who require more customization should look elsewhere for their mouse needs (we recommend the Oystermouse). These ergonomic benefits can be compounded with the use of an ergonomic keyboard tray like the ThermoDesk Stowaway

Ultimately, one of the most serious stumbling points for the Sculpt is a lack of adjustability.  While the board is well-designed and attractive, some users may find portions of it, particularly the mouse, improperly sized for ergonomic use.  Also, the fixed-angle design makes it difficult for larger users to keep their arms by their sides while typing.  Split and hinged alternatives - the Kinesis Freestyle2 and the Goldtouch - can be adjusted to a more extreme angle or simply moved further apart.  As a result, we'd likely steer buyers, treadmill deskers in particular, toward these other options.  While there's no doubt that the Sculpt is an excellent board, proper arm spacing is crucial for walking workers.

If you’re a Mac, then it’s probably not too much of a shock to hear that you’re not exactly Microsoft’s target audience.  As of now, non-Windows users can use the Sculpt, but only as a generic keyboard.

Sculpt buyers should be prepared to go battery shopping.  All three components use different batteries – AAA in the keyboard, AA in the mouse, and a flat watch battery in the external numpad.  Microsoft kindly packages the Sculpt with batteries included, but replacement may be a hassle when it comes around. 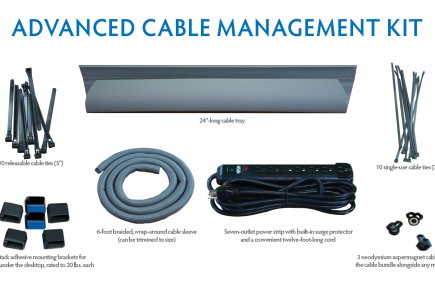