2.0
The lack of adjustability is a major knock – every user requires a different amount of separation after all, but most users will probably find it better than a standard keyboard.

Any ergonomic keyboard worth its salt addresses two basic problems. Ulnar deviation, or horizontal inward bend at the wrist, generally occurs when a typist’s hands are placed too closely together. Pronation – inward twisting of the hands – is an adjustment many folks make while using flat keyboards. Both postures cause serious compression of the nerves, arteries, and tendons in the carpal tunnel. Work too long while committing one of these ergonomic sins, and you’re flirting with repetitive stress injury. The Microsoft Natural 4000 fixes these problems. Sort of.

Our favorite ergonomic keyboards split into left and right halves, letting a user splay them or separate them entirely. The extra space makes it possible to type without risking ulnar deviation. Microsoft’s approach to the problem was to build a keyboard with slightly 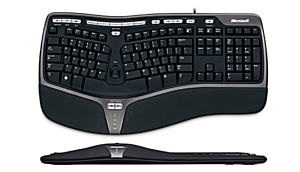 separated, angled key areas. Does it help? Again, sort of. The lack of adjustability is a major knock – every user requires a different amount of separation after all, but most users will probably find it better than a standard keyboard.

Pronation is addressed by tenting, or raising the inner edges of the keyboard halves. Doing so remedies the twist all too common to workers with standard keyboards. Sadly, the Microsoft Natural falls flat where it should stand; the keyboard comes with a minimal amount of built-in tent, but not enough for most users to really benefit from it.

Microsoft may tout the benefits of negative tilt while promoting the 4000. They’re right to do so, negative tilt is ergonomically beneficial, but the “riser” they offer alongside the 4000 is really just a piece of plastic that can be stuck under the front edge of the keyboard. We’re not saying it isn’t effective, but anyone with say, an unused dictionary could make the same fix. However, we did like the included palm rests, which are sold separately with many of the Natural’s competitors.

Some of the most consistent complaints we’ve seen about the Microsoft Natural 4000 are minor, but tremendously annoying. Many buyers complained that the keys required a firm hand to press – RSI sufferers take note. The more expensive keyboards we’ve reviewed usually require around 45g of pressure to activate a key, while the Natural requires around 60g. Doesn’t seem like much, but that extra push can aggravate an RSI. Treadmill users should also be wary, as stiffer keys result in more monitor jiggle.

Most buyers should find it easier to adapt to the Microsoft Natural 4000 than to other ergonomic keyboards, particularly split-board designs (there’s a hunt-and-peck learning curve on these). The hotkeys included on this product are optional, and don’t get in the way. Unlike competing keyboards, the Natural does have a built-in 10-key numpad. However, this feature sacrifices ergonomics for convenience, as it widens the keyboard, forcing a user to reach further for her mouse. Several customers also reported difficulty with the Natural’s space bar, which can miss the occasional tap (users have to hit the center of the bar to activate it – not easy with the separated keyboard halves).

…is Microsoft. We don’t really have to say much more – if you like Microsoft then you like Microsoft, and if you don’t, you don’t. Don’t call in unless you have to; customer service is the telephonic version of hell. On the other hand, you can learn at least twenty different languages from their user manuals. One perplexing advantage the Natural holds over every other keyboard in this category is its 3-year warranty (although it doesn’t cover “subjective or aesthetic aspects”). We’re not entirely sure why this relatively flimsy product has such extensive support, but it simply blows away everything else we’ve seen. Weird.

The Microsoft Natural comes with a shockingly good 3-year warranty. It does, however, also come with a truly forbidding set of restrictions and qualifications.