5.0
Far and away, the most ergonomically adjustable keyboard tray we've ever tested (and we've tested dozens). Rigid stability combined with extraordinary angle adjustability make it the top choice for keeping your wrists and arms healthy while you stand (or walk) while typing. iMovR's newer derivative products, the SteadyType Exo and SteadyType are definitely more mainstream choices (lighter, smaller, less expensive, retractable, etc.), while the Elevon is the tray of choice for ergonomists dealing with clients who've already suffered from ergonomic injuries and need maximum adaptability to different anthropometries.

[Editors’ Note (2/8/2021): The Elevon has been a mainstay solution for the ergonomist community since its introduction in 2017. But with the introduction of the new 2nd-generation design in the form of the SteadyType Exo, and 3rd-generation design in the form of the SteadyType Slide, the Elevon has been temporarily suspended from production. iMovR is re-designing it to make the “side wings” optional and removable, and generally lighter and smaller. We will update this review when the Elevon is re-introduced.]

While adjustable keyboard tray (AKT) designs fundamentally hadn’t changed in forty years, iMovR’s patented SteadyType-based products have so far really been the only ones designed from the ground-up specifically for the ergodynamics of standing desks and the ergodynamics of treadmill desks.

These products fall into two categories. SteadyType is offered as an optional built-in feature of iMovR’s most ergonomic workstations—the Lander Desk and the Jaxson Corner Desk. It is also available as an add-on option for any standing desk, namely the Elevon reviewed here and their newest addition, the SteadyType Exo. The Exo, introduced in early 2021, is intended as more of a mainstream product, at a lower price point and without the “wings” on the left and right Elevon; i.e. the keyboard and mouse cohabitate the same tilting platform.

Since iMovR launched the Elevon on Kickstarter in 2017 it has become the ergonomic keyboard tray of choice for ergonomists dealing with clients who already suffer from complex repetitive strain injuries (RSIs), due to the fact that it is literally the most adjustable keyboard tray ever designed. We each have our unique anthropometries, and ergonomic design is all about making the equipment match every individual’s unique body shape. And in the case of the Elevon, also the unique range-of-motion limitations each user may have, especially those who’ve already suffered an ergonomic injury in the past.

A viable solution for 99% of standing desks and treadmill desks

The advantages of SteadyType basically boil down to two things: 1) the ability to achieve truly neutral arm and hand positions, typically between 30° to 45° of tilt, but technically up to 85°, without losing your keyboard, and 2) rock-solid rigidity as compared to the relative floppiness of typical ergonomic keyboard trays. These two attributes combine to provide the highest possible typing proficiency (i.e. faster typing and fewer typos), and the best possible ergonomic posture—meaning greatly reduced risk of RSIs.

iMovR’s Elevon™ tray allows you to add a SteadyType tray to any standing desk or treadmill desk, and it adds two “side wings” that can also tilt to the same extremes. However, their pivot axis is at a 45-degree angle to the pivot axis of the keyboard tray.

The result is an “ergonomic arc” around the user, offering completely neutral arm and hand positions for both keyboard and pointing device (mouse, trackball, trackpad or whatever). Pointing devices and other items that you keep on your side wings can be captured in a “nest” created by moving the supplied pins around in the grid pattern of holes. Two or three pins are all that is required to capture a mouse or trackball, for example.

Installs on almost any standing desk, in 30 seconds

Anyone who has ever had to install a keyboard tray knows what a project it can be (we even wrote an entire article on the subject). First you have to clear your desk off completely, flip it over, drill pilot holes using a paper template, screw in the slide rail, assemble the keyboard arm, slide it into the rail, and install the rail stop hardware. And that’s if you don’t have to redo the job because you eventually realize that the keyboard tray is centered on the monitor but not on your Numpad-equipped keyboard, leading you to have to undo it and reinstall the tray a few inches over to the right. Bottom line, it’s never a simple task.

The Elevon, on the other hand, installs in half a minute (see installation video). It has a long edge clamp that is secured to the user edge of your desk with just two knobs. Two more knobs, eight inches back from the user edge of the desk, allow you to level the Elevon if the tabletop has a lip on it. Nothing could be simpler.

Technically, the Elevon is portable, or at least very easily removed with the reverse twist of a couple of knobs. However it is quite heavy—which gives it an incredibly solid feel and makes it a rigid part of your desk—but it’s not lightweight for carrying around. For portability we definitely prefer the smaller, lighter SteadyType Exo.

The Elevon is a highly innovative solution for installing a fully ergonomic keyboard tray on a standing desk (plus it’s rigid and safe enough to use with a treadmill desk, as well). It falls under the same set of patents that iMovR came up with for the SteadyType tray, and has been developed by a team of ergonomics, medical, and mechanical experts over the course of several years.

Each year since 2015 at the ErgoExpo trade show, we got to witness dozens of ergonomists ogle over the Elevon, affirming the challenges they have fitting ergonomic keyboard trays to standing desks and treadmill desks, while getting users into completely “neutral” positions over their keyboards and pointing devices. iMovR displayed the prototype at their booth for a couple of years before finalizing the design, and the input they received from hundreds of ergonomists over that time is clearly evident in its final design.

The new smaller, lighter, and less expensive SteadyType Exo is going to be a better choice for most mainstream users, while the Elevon offers an even more optimal ergonomic arc around the user and remains the most adjustable keyboard tray on the market for users with more stringent ergonomic requirements. 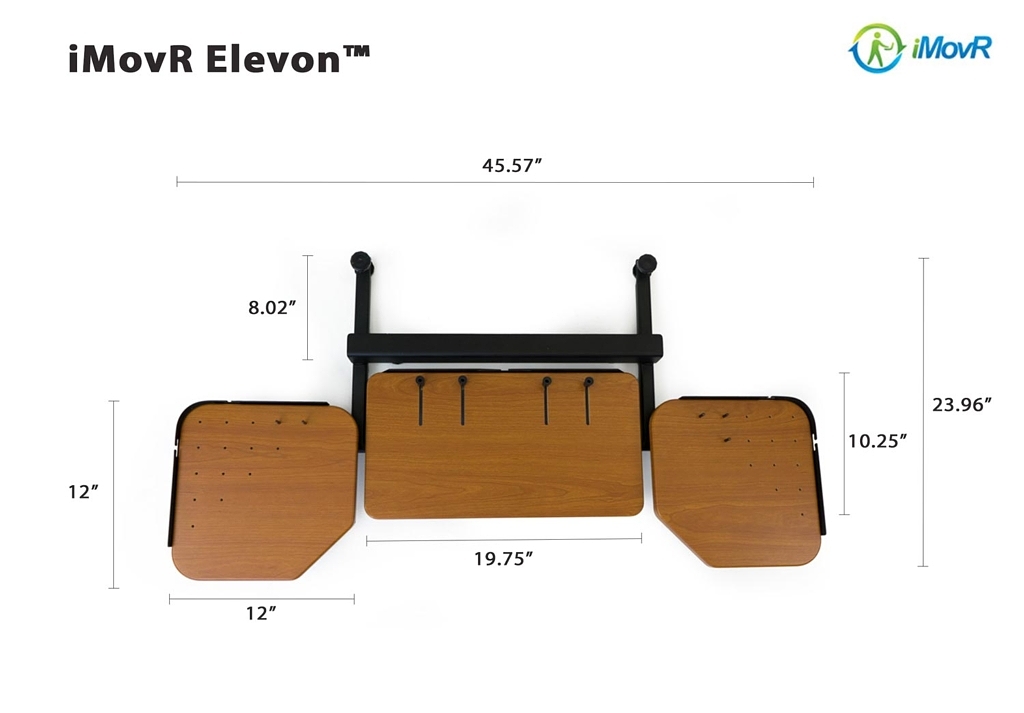 The Elevon comes with a lifetime warranty on the frame and a 5 year warranty on all other parts.