2.0
Multiple design flaws stem from the fact that this was originally designed as an upright cardio exercise bike, simply re-skinned and re-positioned as an office fitness product to broaden out Lifespan's popular treadmill desk line (which has seen far greater success). Poor reviews from verified buyers on Amazon confirm what our review experts have long said about this product. If you don't want to be disappointed and have to hassle with returning it, move on to one of the many competing products that are twice as good at half the price.

When the LifeSpan C3 Bike Desk was initially released, many in the office fitness industry wondered about the prospects for this machine—which rumored to have been a pet project of one of the company executives. Introduced at a price of $999, the product has since been gradually marked down to $729 (and still dropping?), indicating a distinct lack of demand for it. Indeed, customer reviews on Amazon amount to a handful—and half of those from people who gave it 3 stars while still returning the unit—while the Lifespan treadmill desks have garnered hundreds over the same timeframe. Again, an indication of a lack of popularity. One contributing reason may be the very low average rating of only 3 stars, which, given how optimistic Amazon customer rating stars usually are, and given what this handful of customers wrote about the product, leads one to imagine that its future prospects are no less bleak than its historical success. LifeSpan Fitness, a cardio fitness equipment brand of Taiwan-based Strengthmaster, and maker of the TR800, TR1200 and TR5000 treadmill desks, introduced the C3-DT3 Under Standing Desk Bicycle in 2013. It is a variant of the LifeSpan C3i upright exercise bicycle, with a small desktop control console (similar to the brick used with their treadmill desks) replacing the handlebars and large display/input console that you’re used to seeing attached to an exercise bike. As they’ve done with their treadmill line, there are “C3-DT5” and “C3-DT7” versions of this setup, sporting manually and electrically adjustable-height desks, respectively, in a bundle with the bike. For the same reasons we don’t care for the ergonomics and aesthetics of the DT5 and DT7 desks when used with an office treadmill, we would advise pairing the C3 with any number of better, more attractive adjustable-height desks.

Solidly Built but an Ergonomic Nightmare

One thing Lifespan is known for is solid mechanical construction. Like their treadmills, the C3 desk bike is built to last, at least as far as mechanical components are concerned. One demonstration of this is the extraordinarily high user weight capacity, which Lifespan claims to be 400 lbs. Oddly enough, however, this is one of the few desk bike products that only pedals forward—it literally won’t go in reverse like most of its competitors can. Users report the seat to be comfortable, albeit not for long periods of time.

Electronics and software have long been a weakness for this product group, with minimally functional, membrane keypad consoles and old-style LED readouts. There are no LCD displays here, no programs to run, and no memory to hold a record of your activity. While the unit does have a Bluetooth transceiver, the software and apps its supposed to connect to just about never work and quickly frustrate users to the point that no one ever bothers to sync their data. Forget syncing to your Fitbit or other wearable devices. Complaints have mounted over this poorly designed Bluetooth interface for as long as Lifespan Fitness has been in the office fitness business; there appear to be no plans whatsoever to update it. When devices like the Cubii smart under desk elliptical come with well-written, feature-packed apps for iPhone and Android—and seamless integration with popular wearables like FitBit and Jawbone—at less than half the price, you have to wonder what the engineers in Taiwan were thinking with the Lifespan C3.

Ergonomically, things go from bad to worse. First of all, you can forget about typing productively while pedaling. Typing at a computer while seated at this bike desk quickly becomes uncomfortable—and if you start pedaling in a crouched-over position, leaning on your mid forearms to support your upper body, it will put you into physical therapy in short order. Even mounting and dismounting from the bike seems to be exceedingly awkward—with shorter, average height, and taller users all complaining about how uncomfortable it is to do so. Several users reported returning the product for this reason alone. Weighing in at 85 lbs, the Lifespan C3 Bike Desk is ungainly and not all that easy to move, despite the built-in wheels.

Ergonomics are critical if you’re going to use a bike desk, as we discuss in our primer on How to Set up an Ergonomically Proper Desk Cycle. But even if you get your ergonomics set up well, don’t expect to type much while cycling. The more intense the pedaling resistance, the harder it becomes to think and move your legs in a circular motion at the same time. Cycle while reading, pause while typing, and you might just avoid sweating too much at your desk. It’s simply not as natural for our brains to think and cycle at the same time as it is to do so while walking. Speaking of which…

For all its success in the treadmill desk business, Lifespan has blown it in the desk bike category, trying to get away with “re-skinning” a cardio exercise upright bike and positioning it as another office fitness product to complement the rest of the line. There are pros and cons to each, as we discuss in this article about Treadmill Desks vs. Desk Bikes, that consumers should consider before choosing one type of device over the other. But let’s be clear on one thing: while it is true that walking while typing results in more blood flow to the brain, greater focus ability, and (presuming your ergonomics are set up correctly) higher productivity, desk bikes, generally speaking, are more about getting cardio workouts than fighting off sitting disease—or getting a lot of work done at the same time as you’re getting some healthy movement.

If You Still Really Want a Desk Bike

We totally recognize that thousands of mini elliptical trainers and under desk cycles are sold each month, largely to cycling enthusiasts who want to keep working those quads while they’re on the job. From an office fitness standpoint, there are some drawbacks to keep in mind, but one thing’s for sure: The design of the product and the ergonomic setup of your workstation are paramount to success. If you haven’t yet, check out our round-ups of Bike Desk Reviews, as well as the related Desk Cycle Reviews, before choosing the best product for your particular needs. 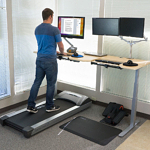 For kicks, our review staff created what we imagine is the world’s first sit-stand-walk-pedal workstation. Check out the blog article on our Quad-Modal Office Fitness DreamStation. We integrated a Cubii with an iMovR Everest Dual-Tray desk, an iMovR ThermoTread GT office treadmill, a Tempo TreadTop Office Chair, and an EcoLast TreadTop Anti-Fatigue Mat to optimize movement during the workday.

If you do end up deciding to invest in a cycling workstation, definitely check out our primer on How to Set Up an Ergonomically Proper Desk Cycle to ensure a successful experience.

Buy on LifeSpan Buy on Amazon

Top Bike Desk Reviews
Bike desks are basically stationary bikes that integrate with a desk workspace. We break down the top options with our roundup of bike desk reviews.… Read more >
Top Desk Cycle Reviews
We sent our staff out to review the top under-desk pedal units on the market. They investigated design features, weight and size specs, customer experiences, and more according to our rigorous review…… Read more >
Treadmill Desks vs. Desk Cycles: How They Compare
Two very popular new fitness aids, the treadmill desk and the desk cycle, have burst onto the scene, and we often get asked which one is better.… Read more >
How to Set up an Ergonomically Proper Desk Cycle
Call them desk pedals, desk cycles, under desk pedals, or desk ellipticals. Whatever you choose, these devices require upfront effort before use at a desk.… Read more >
LifeSpan Fitness C3 Bike Desk Review
Poor reviews from on Amazon confirm what our review experts have long said about the Lifespan C3 desk bike: It is designed for exercise not desk work.… Read more >
Flexispot Deskcise Pro Review
While the Flexispot Deskcise Pro doesn't solve any of the core problems, it's a step in the right direction with sit, stand, and cycle capabilities… Read more >
Markant Oxidesk Bike Review
The Markant Oxidesk Bike is the platypus of exercise desks—neither a beaver nor a duck. With its many ergonomic issues, we can't recommend this product.… Read more >
FitDesk 2.0 Stationary Bike Desk Review
If you want a bike desk that lets you check your email, you've found it in the FitDesk 2.0 Bike Desk. But anyone else should think twice. … Read more >
Bike Desks, Smart Desks, and More: 5 Strange and Innovative Active Workstations
The age of the active workstation is upon us yet we've crawled the web in search of new approaches to the active workday and strange workstations.… Read more >
Stamina InStride Folding Cycle Review
The most portable desk cycle we’ve reviewed so far, the Stamina InStride Folding Cycle is a folding cycle for quick use on the go.… Read more >
LifeBike Portable Pedals Review
Desk cycles have always shadowed treadmill desks and been outshined by more outrageous bike desks, but the stream of new products keeps the interest alive.… Read more >
Sunny Health and Fitness Magnetic Mini Exercise Bike Review
The Sunny Health and Fitness Magnetic Mini Exercise Bike may not be an ideal cycle desk, but it does have a few redeeming qualities.… Read more >
MagneTrainer-ER Mini Pedal Exerciser Bike Review
A pedal exerciser like the MagneTrainer serves its purpose in the clinic like a charm, but the office is foreign territory where it struggles to perform.… Read more >
How We Conduct Desk Cycle and Bike Desk Reviews
We waded through the jungle of pedal exercisers and found you the best desk cycle on the market. What is it? The Cubii. How'd we do it?… Read more >