Overhyped by a manufacturer with very questionable marketing practices, the TrekDesk has the fundamental problem of violating many of the basic rules of how to build an ergonomically-proper, stable, attractive and productive treadmill desk. We would caution anyone thinking of buying a TrekDesk to research it carefully, and then search Craigslist for used units. For $70 more you could purchase an adjustable-height desk and be ten times happier.

Ergonomically atrocious. Structurally weak, if not unsound. Hard to assemble. Blocks the control console on most treadmill models. At best will force an incorrect height setting if controls are to be safely reachable. Many well-documented user complaints about the product, as well as the company's marketing and customer service practices.

The TrekDesk makes a lot of empty promises. It promises to be height adjustable: it's not. It promises stability, but its construction appears too flimsy, and too many customers have complained about an inordinate amount of shakiness. And while it might seem like a good deal, better workstations with true height adjustability are within reach to anyone willing to spend a bit more.

[Editor’s Note January 31, 2019: After a very long and controversial run, the company behind the TrekDesk appears to have gone insolvent. Visitor traffic to TrekDesk.com is so minute that it no longer merits a measurement from Alexa or Comscore, and the home page sports a 2011 copyright statement. The LinkedIn profile for company founder Steven Bordley shows that TrekDesk was no more as of Dec, 2016. The last place that the product could still be purchased last time we checked in 2018 was on Amazon, but this listing now shows that the product is “currently unavailable.” So, for all intents and purposes it appears that TrekDesk has finally joined the dead pool, where in our expert review staff’s opinion it belonged a long time ago. Following is the last version of our review from 2015.]

Arguably, the noisiest company in the treadmill desk business is TrekDesk. They pump a huge amount of PR propaganda out on the internet and get a lot of people to write about their product. The good news is they are aggressively spreading the word about the health benefits of the treadmill desk. The bad news is their product has serious design flaws in its stability and ergonomics that prevent us from recommending it to anyone who is looking to build a safe and productive walking workstation.

The art of interpreting user reviews

Anyone who has ever purchased anything online has probably checked out a few user reviews from previous buyers before handing over their money. As professional reviewers who study user experiences for a living we can tell you that such reviews can be modestly helpful in many cases, but downright misleading in others. Many manufacturers selectively curate only the most positive reviews to reveal to site visitors, leaving negative reviews unpublished. We find that reviews on sites like Amazon are generally more reliable because they can only be posted by verified purchasers of the product. At the same time, we’re also aware that savvy sellers on Amazon can, and usually do go after customers who’ve posted negative reviews, to request that they remove them (perhaps by offering a refund or replacement product, e.g.). Failing that they will often contest negative reviews with the site’s arbiter (e.g. Amazon) in hopes of having the disparaging comments removed.

Unlike most products we have the pleasure of reviewing at WorkWhileWalking the TrekDesk has been in the market for several years, long enough to garner hundreds of online user reviews, so reading through every one of them has informed our review team a great deal. The case of TrekDesk’s user reviews exemplifies the challenge we often run into in separating users’ general enthusiasm over the concept of treadmill desking from their feelings about the particular product. We recognize that treadmill desking for the first time after decades of serving a desk sentence will yield shrieks of joy and proclamations of life-changing wonderfulness – we witness it every day from our readers and customers – but in objectively analyzing user reviews of a product we must separate that enthusiasm from specific remarks about the qualities of the product in question.

Surprisingly, TrekDesk gets an extraordinarily high rating on Amazon (4.5 stars) so you may be wondering why our expert review staff gave it only a 1-star rating. The company does a fantastic job of generating publicity for itself, and they get big wows from customers who more than anything have just fallen in love with treadmill desking, not necessarily with the TrekDesk product. Because of their widespread PR campaigns most of their customers have never even heard of a treadmill desk before encountering the TrekDesk. To read the company’s marketing materials you could easily imagine that they invented the treadmill desk and are the sole manufacturer of them. The typical TrekDesk buyer probably didn’t spend much time researching other, potentially better products, if any at all. At such a low price point it’s easy to see why many consumers would not bother with further research, especially given the high user rating. This becomes particularly apparent in separating out reviews written immediately upon receiving the product from reviews written after a few days or weeks of actually using it.

Is it a desk or a treadmill desk?

We’ll start off with this point as it is often the thing that TrekDesk buyers most vociferously complain about in their reviews. We found numerous complaints from buyers who had expected a complete treadmill desk system, only to find it’s just a standalone desk, and that they must provide their own treadmill. We’re used to seeing “treadmill desks” that are really just desks, sold independently of the treadmill, but can see why consumers would expect the TrekDesk to come with one. TrekDesk’s Amazon listing advertises the TrekDesk as an integrated treadmill desk – which usually means it’s attached to the treadmill. All of the photos in the listing indeed show the TrekDesk paired with a treadmill base. We note that showing a picture of anything that isn’t included with the purchase is in direct violation of Amazon’s merchant rules, yet somehow TrekDesk has managed to list their product this way for years without a demand for corrective action from Amazon.

Is that an earthquake or just my desk shaking? 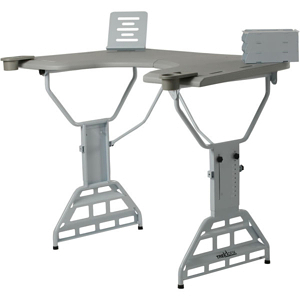 Stability and density are major attributes to consider when buying a desk – especially if you plan on walking in front of it. The Trek Desk does not appear to consider these factors all that important, as its components are thin and much too light. The base’s legs are made of sheet metal and narrow tubes. The table top is a flimsy-looking plastic affair that is made of two connecting pieces, as opposed to a solid piece like most desks. While this keeps the shipping expense low it does so at the cost of assembly difficulty and structural integrity. With a 55 lb. weight rating it is the weakest of all the desks we’ve ever reviewed. Most users tend to lean on their work surface when typing, and doing so on a TrekDesk could pose a genuine safety hazard.

The TrekDesk adds a few peripherals for users to customize their workstation: cup holders, tablet stands, and document trays. Unfortunately, these peripherals are relegated to accessory slots along the edge of the table top, so users can’t position them exactly where they want them. These slots also act as grommet holes to manage your cables.

Height-adjustable, but really not

The TrekDesk’s height adjustability is also subpar compared to most other desks one would pair with a treadmill. While most adjustable-height desks have either a motorized-base or a crank adjustment mechanism to easily bring the desk up or down, the TrekDesk relies on adjustment knobs on each leg. This means that you won’t be able to adjust the height of the desk while you’re using it: instead, you’ll need to move to the side and adjust each leg individually – a slow and inconvenient procedure.

Of course, you won’t need to worry much about height adjustment, because the TrekDesk’s minimum height of 46.5″ is much too tall to use as a sitting desk. It’s design is more of a “set it and forget” style useful only in a single-user treadmill desk configuration. For a shared workstation setup you’d want a desk with on-the-fly height adjustability.

The TrekDesk’s going price of $650 is far too high for a desk with paltry performance specs. For $100 or $200 more you could buy a real sit-to-walk desk with a much nicer, single-piece laminated wood table top. There are numerous desks available of significantly better quality and featuring on-the-fly adjustability that are priced only slightly higher than the TrekDesk, such as the ThermoDesk Ellure, and the ModTable.

What you get with the TrekDesk is a plastic desktop that can’t be used sitting down, designed to be paired with a running treadmill. The TrekDesk itself will likely block out the control console that you’ll need to access in order to turn your treadmill on and off, adjust speeds, etc. This design flaw is not initially evident to unsuspecting consumers who buy the desk, assemble it, place it over their treadmills and only then discover they can’t reach the controls. The proper way to use an existing treadmill, as we discuss in depth in the Build Your Own section, is to remove the console and pedestals and use an adjustable-height desk to create your own personalized treadmill desk workstation.

Our biggest health concern with TrekDesk is that their design often forces people to set the height of the desk at an ergonomically problematic height in order to be able to reach the controls of their treadmill, which is a formula for long-term aches and pains (see our Ergonomics 101 tutorial on setting up your treadmill desk workstation).

Our biggest concern from a marketing fraud standpoint is TrekDesk’s over-the-top marketing claims that we find counter-productive to treadmill desk adoption because they set expectations that are exceedingly unrealistic. For example, this claim on their website states that using a TrekDesk will lead to “weight loss of up to 50-70 lbs in a single year without restrictive dieting.” They offer no proof of any kind that a single TrekDesk owner has ever achieved such miraculous results. If a treadmill desk were considered a medical device, such unsubstantiated health claims would be in violation of federal law. They need to tone it down.

TrekDesk offers a two year limited warranty and a conditional 30-day guarantee. See website for details on how to measure your treadmill to see if the TrekDesk will fit well with it.

At the time of this writing the TrekDesk was out of stock and only pre-orders are being taken on their site. We’ve seen this before with TrekDesk, including, remarkably, last Christmas (high season for treadmill desk sales). The company appears to perhaps have supply problems or cash flow problems that prevent it from keeping the product continuously available. Must Read: Top Under Desk Treadmill Base Reviews
Read More