What Does the Average Treadmill Desk User Look Like?

by Office Fitness NinjasOctober 21, 2013
0
Now Reading
What Does the Average Treadmill Desk User Look Like?
Contents A Profile of Treadmill Desk Users

At WorkWhileWalking we not only get to play with all the latest standing and treadmill desk gear in our testing lab but we also get to hear from SitLess.com’s customers who walk into their treadmill desk trialing center in Bellevue, WA, or do business with them online. That’s given us a lot of anecdotal data about what the “average” treadmill desk user looks like, but to this we’ve recently added the result of an online survey of over 230 walking workers.

First, the statistical breakdown from the survey.  It may surprise you at first blush, but perhaps not after thinking about it for a moment, that out of this entire group the gender mix was 51%/49% female vs. male. Sitting disease is an equal opportunity affliction, and according to the latest statistics from the Pew Research Center women are not only one half of all internet users but a greater percentage of online women than men use social media in general. They’re sitting just as much as the guys are, whether for work or for recreation.

As a whole, this group of 230 treadmill desk users averaged a current weight of 186 lbs. with a goal of getting down to an average of 159 lbs. Breaking this down by gender, the average woman weighed 161 lbs. and wanted to lose 24 lbs. to get down to a svelte 137 lbs. The average male weighed 209 lbs. and was aiming to lose 30 lbs. to get down to a fighting weight of 179 lbs. Again we see nearly perfect parity between the genders in both hoping to lose about 15% of their body weight by incorporating more movement into their busy lives.

While we did not collect Body Mass Index (BMI) statistics on these survey respondents to be able to determine the percentage of the group that is technically overweight, obese or extremely obese, on the whole this group of treadmill desk users is apparently healthier than the national average. According to the Centers for Disease Control’s (CDC) 2009-2010 published statistics an estimated 33.0% of U.S. adults aged 20 and over are overweight, 35.7% are obese, and 6.3% are extremely obese. With treadmill desk users generally being over 40 years old and therefore in a peer group with even higher average rates of obesity than that of the average of all US adults, our survey group appears to be quite a bit healthier than the norm.

And that fits well with our anecdotal observation that the vast majority of treadmill desk users today are actually fairly fit, if not actively athletic well into their 50’s, 60’s and beyond. While treadmill desk makers tend to put “lose weight fast!” as the primary benefit on their advertisements the fact is they are shouting out to a largely imaginary group of buyers, at least at present. The real buyers of this equipment today are highly-educated, high-earning individuals who are well read on nutrition, metabolism, and exercise, and probably have been so most of their adult lives. It’s because they are tuned into health related news and information that they are seeking out treadmill desks. They know about sitting disease and want to proactively stave it off before it gets the best of them.

In fact a very significant percentage, if not the majority of treadmill desk users are suffering from bad backs, circulatory issues, posture issues and other negative impacts of sitting disease, and are not looking at a treadmill desk primarily as a weight loss machine. They already have gym memberships, many of them are runners, cyclists, swimmers or otherwise getting plenty of aerobic exercise, but they still suffer from sitting disease, or are afraid of developing it given how much time they spend in front of a computer all day.

Manufacturers that claim rapid weight loss benefits from using a treadmill desk are not only bordering on fraudulent claims, they’re not even talking to the biggest portion of their potential market. The fact is before you invest in a treadmill desk you have to decide you want to improve your health, and the more obese you are, statistically, the less likely you are to be proactive about getting healthy. That’s just a fact of life. As Newton put it, “an object in motion stays in motion.”

A Gateway to Greater Activity

So if marketers are missing the mark, what about the truly obese (and diabetic) within our population? Is treadmill desking really for them, or are they just too far gone? Speaking as someone who was a bike racer in college yet tipped the scale at 325 after twenty five years – mostly sitting – in the tech industry, I’m a huge believer in treadmill desking as a “gateway drug” for those of us who are obese to get moving in the right direction again.

Once I started treadmill desking I noticed a marked increase in stamina and a reduction in incidental injuries, both of which allowed me to enjoy longer hikes in the woods and workouts at the gym. Along with feeling better physically comes a brighter mental outlook, and I soon found, as well, that feeling healthier just made it easier to make smarter choices at meal time. In a matter of months I not only got my blood sugars down from “extremely diabetic” to “pre-diabetic” levels, but my triglycerides, cholesterol and blood pressure fell back into normal range again as well.

To be clear, treadmill desking alone didn’t accomplish all this. It took exercise, significant dietary changes, taking measures to get more sleep and reduce stress in my life, and some medication from the good doctor. As time went on one of the most satisfying aspects of adopting this new lifestyle was watching the pill count in my daily dispenser go down instead of up as it had been for years.

Everyone knows we have a huge problem with obesity and diabetes in modern society, and we’re beginning to understand the subversive role that technology – be it computers or automobiles – has played in skyrocketing the incidence of sitting disease. If you are an employer or health care worker you can do something very substantial, very easily, to help change this unfortunate and unsustainable state of affairs.  Introduce treadmill desking to your employees or patients who could most benefit from it.

Start with the heaviest and work your way down to the slenderest. Remember the rest of Newton’s first law of physics, “an object in motion stays in motion, unless acted upon by an unbalanced force.” You can be that force that helps these people to overcome their inertia and reverse their momentum. Once they try it – no matter how heavy they are today – they’ll quickly see how easy it is to adapt to a new working style that incorporates more movement into their daily lives, and it’ll set them on the right track again.

Join us in this all-important campaign to slim America down. Spread the word! 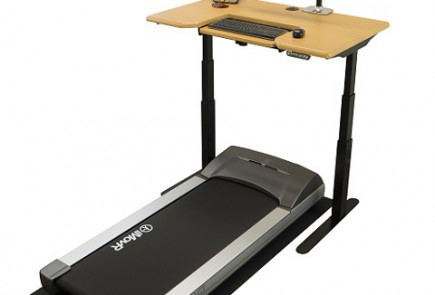 How to Rent or Lease a Treadmill Desk
Read More 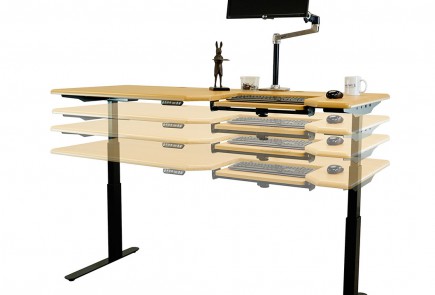 How Long Should You Walk When Working at a Treadmill Desk?
Read More