[Editors’ Update: as of May 24th, 2019, the Indiegogo crowd-funding campaign having only ten days left to go, the EgoFit has had exactly one order on the books. In all likelihood it will fail to meet the minimum threshold to close. We have to admit we’re not the slightest bit surprised.]

We’re looking forward to receiving one of the first pre-production prototypes of the new “Walker” from Chinese treadmill manufacturer, EgoFit. If nothing else, it promises to provide some comic relief from the stress of having to keep up with all the legitimate new commercial-grade office fitness products hitting the market each week.

A categorically unique design, we’re curious to see how it will actually work in conjunction with a standing desk, as EgoFit implies it will in the Indiegogo campaign marketing materials that they’ve provided. We do want to point out up front that this company reached out to us directly, and likely without reading anything about our published editorial standards and how we conduct proper treadmill desk reviews. Had they taken the time to do so we suspect they wouldn’t have asked us to write a review of their new invention.

Since the product does not yet exist we can only write a “forensic review” based on information gleaned off their crowdfunding campaign page and written answers we received from the company in response to our initial questions.

Somewhere between a stepper machine and a treadmill – but is it really an office treadmill?

The EgoFit Walker is unconventional, to say the least—a bit of a platypus, frankly. It’s not a full-length treadmill so you won’t be able to take full-stride steps on it. In fact, if you look at the models in their GIFs, they seem to have an awkward time of it despite the phony poses. While walking on this device requires the same level of physical exertion as using a stepper machine, it’s really more like walking up an incline than steps. Assuredly something that would be awkward to attempt the first time, and very questionable as to whether this is something you could really get used to.

Like a lot of Chinese fitness equipment companies, EgoFit is chasing the treadmill desk opportunity without having the first clue as to what is required to work effectively at a desk while walking. The continuous vertical and horizontal motion that would be required to not fall off the frighteningly short and narrow Walker would appear to make it literally impossible to type at the same time. And indeed, no one in the videos is even attempting to type at their “treadmill desk.”

Of equal questionability is the fact that walking at this much of a vertical grade will quickly put the user into a cardio heart rate, the exact opposite of the principle of NEAT (Non-Exercise Activity Thermogenesis), upon which the entire treadmill desk industry was founded. Of course it isn’t NEAT Certified by The Mayo Clinic as legitimate active workstations are.

Why does that matter? There’s a sweet spot between standing or sedentary heart rate and full cardio exercise where we experience heightened productivity and focus, elevated mood and a host of other beneficial biological responses to raising our BMRs (basal metabolic rate) by at least 10%. More oxygen flow to the brain, caveman DNA kicks in and signals our brains that we’re on the hunt, eschewing distractions and sharpening our focus. Also revving up our calorie burn. But not to the point of reaching cardio heart rate where our muscles would be stealing most of the oxygen, we’d begin to sweat all over our desks, and our cognitive abilities would start turning to mush.

Too many hyperbolic marketing claims per square inch 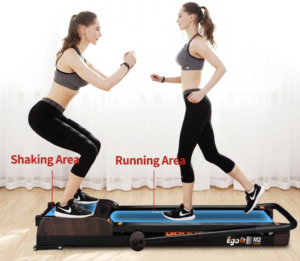 As we see with a lot of fitness equipment being marketed by Chinese manufacturers on infomercials, Amazon and especially unregulated crowdfunding sites like Kickstarter and Indiegogo, there’s a fair bit of huckstering going on with marketing claims. After all, this product is from is the same inventor, Carl Jiang of Jinhua, China, that in 2017 marketed the EgoFit M2 “3 in 1” treadmill desk with a built in shaker platform for “shaking away” your body fat. In 2017, not 1957.

Of course the company’s Facebook page already has 101 5-star reviews at the time of this writing, and no lesser ratings, even though the product has not yet shipped and the Indiegogo campaign hasn’t even gone live yet. All the best practices of sham online marketers.

Like the Walker, the M2 had an impressive looking list of patents, but a lot of folks don’t realize you don’t actually need to prove efficacy in order to obtain a patent on a mechanical design. As the saying goes, you could patent two 2×4 boards nailed together and claim that they’re anything from a baseball bat to a rocket ship… as long as no one else has nailed together two 2×4 boards in the same way in a previous design. There is no requirement that the device be able to hit a baseball well or be launched into space.

On the plus side, this is a very compact, portable design, and relatively light weight since gravity takes on much of the load of what would normally require a much larger and heavier motor in a flat treadmill. If you’re looking for something to slide out from under the sofa and use to get cardio exercise while watching TV, and you’ve got a pretty short stride, maybe this $499 thing would be perfect. Note, however, that the incline angle is not adjustable on this device, unlike a typical running treadmill—all you can adjust with the handheld remote is the tread speed.

Our primary concern, after testing countless treadmill desk products and our own review team walking a collective untold but substantial number of miles on our own treadmill desks since 2007, is that anyone would feel comfortable walking on such a short deck. It seems remarkably prone to slipping off the end of the track with only a split second of distraction from the concentrated focus it seems would be required to stay centered on this short and narrow tread.

Looking at some of the other exaggerated claims, the graphic at the top of the page depicts a comparison between a legit office treadmill (an iMovR ThermoTread GT with the logos photoshopped out) and the smaller EgoFit Walker. It claims to be “3X Smaller and Just as Powerful” yet we can’t cotton to their math on this claim. For one thing the ThermoTread GT has a powerful 3.0 HP motor and is UL-certified with a 400 lb user weight rating and 24×7 duty cycle. Right there in their graphic they claim a 280 lb max user rating, and we know the motor inside the unit has a continuous rating of only 0.85 HP. At 43 lbs the weight of the unit is about 1/4th that of the built-like-a-tank ThermoTread GT. Lengthwise the Walker is a little less than half the length and a third narrower than the iMovR unit. We’re not sure where they found the contemplative, 280 lb micro elephant to pose for this shot. When we asked Bonita-tech about the actual testing they performed to substantiate their published specifications they responded that they don’t as yet have UL or CE certification, but that they performed 800 hours of testing with a 280 lb load at 1.0 mph (versus the 3.0 mph claimed top speed of this unit—but honestly we can’t imagine anyone managing to keep that pace on such a short tread deck). Color us skeptical when it comes to actually obtaining UL or CE certification for this device, that lacks handlebars or an emergency stop button and yet can spin up to 3.0 mph.

OK, what about using it as an exercise machine instead of as a treadmill desk?

Even if you forego the claims that this is a low-cost, compact treadmill desk and instead believe their marketing claims that it’s also a good exercise machine for couch potatoes, there are problems with that scenario, too. This is a motorized unit, so “walking” without weight bearing, while sitting on your bed or sofa, is letting the machine do all the work for you. You’d get more real exercise from something like a Cubii Elliptical unit than this Rube Goldberg contraption. Like we said above, someone quite diminutive in stature, i.e. with a very short stride, might be comfortable walking on this device while doing something like watching TV on a rainy day. In no way should anyone fall for the idea of using this device under a standing desk and actually getting any work done. The GIFs on Indiegogo are obviously staged one-second-long shots that are meant to give the impression that you could write or type while walking on this device but that’s about as likely as molasses flowing uphill in January. We’re surprised they didn’t show someone juggling machetes while exercising on this device, given EgoFit’s penchant for outlandish claims.

…and we receive the promised pre-production sample of the EgoFit Walker, we’ll definitely give it a fair shot in the test labs. But as we learned when we tested the now-defunct Woodway Treadmill Desk with it’s short 40″-long belt, we’re going to have a very hard time getting anyone to stay on this even shorter (<30″) belt for more than ten seconds before their lizard brain tells them to jump off and save themselves from injury.

If you’re looking for a real treadmill desk you can actually work on productively check out our Top Treadmill Desk Reviews for great options from reputable manufacturers. Stay abreast of all the latest news and products in Office Fitness by subscribing to our free newsletter.