Among Ergotron's standing desk converters, the Workfit-A can be considered its acrobat. It's easy to move, whether from sitting to standing or side to side. Its only footprint is the small base mounted to your desk, and it can be lifted out of the way for those times when you need adequate desk space. It does suffer more from monitor shake than either the Workfit-S or -T, and its lift capacity is weak compared to more "grounded" risers, but the Workfit-A is an ideal sit-stand workstation where space and mobility are crucial. Outside of the Ergotron-to-Ergotron comparisons, however, the Workfit-A was once a pioneering product, but now being overshadowed by even more innovative, and more ergonomically adjustable units from a burgeoning field of competitors.

In creating the Workfit-A, Ergotron pioneered what has become a rapidly expanding subcategory in the field of standing desk workstations. The WorkFit-A is made of polished aluminum, giving it the same blend of form and function that we've loved in other Ergotron models. Flexibility is another Ergotron hallmark, and this octopus-limber desk mount is no exception. A user-friendly tension control system allows for fluid movement, and relative stability.

Like all hovering sit-stand workstations, there's more wobble in the giant arm mechanism than you'd get with a more conventional clamped down or heavily weighted standing desk converter, but the trade-off of winning back 95% of your desk space may well be worth this one concession. That said, imitators have been coming out with more innovative, more ergonomically adjustable models that leave the Workfit-A a little bit behind the times. When stacked up against new competitors the Workfit-A may come in slightly cheaper but not necessarily a more-for-your-money bargain.

Many users will find the shakiness of the monitor arm irritating, but this nifty little desk mount shines in other areas. It's easy to set up, and easy to use. Get it adjusted right, and the WorkFit-A is a great alternative to a more conventional sit-stand converter.

The Novelty of a Hovering Sit-Stand Workstation 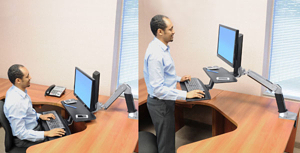 In reality, nobody has a desk this free from clutter

The sit stand workstation, which converts your sitting desk to standing height, has been gaining popularity among folks who want to keep their desk, but nonetheless want the ability to stand at work. They make it easy to have a more active workspace without having to remodel the office. However, one of the inevitable downsides to this alternative is that they're difficult to move. Most sit stand workstations rely on a clamp to secure onto your desk top. Once attached, the riser can't be repositioned without detaching it from the desk. This is less than ideal in workplaces that tend to accrue a lot of paper flow—think hospital administration, for one—and where workers have to move from one side of the desk to the other.

Ergotron, which manufactures an assortment of monitor arms, like the LX and the Sit-Stand, was the first to create a "hovering" standing desk converter arm—with the venerable Workfit-A. Basically a giant monitor arm with a keyboard tray and work surface attached to it, a hovering sit-stand converter is designed to preserve desk space and allow users to move not only up and down, but side to side as well. The Workfit-A launched a new subcategory in the burgeoning field of standing desk workstations, having now been followed by innovators who've improved on the concept with newer designs, such as the iMovR Cadence, Cadence Plus, Cadence Express, the Humanscale QuickStand Lite, and the ESI Climb.

Simplicity is a primary selling point for the WorkFit-A. Installation is virtually pain-free, taking under an hour, assuming you have all the right tools. The Workfit-A does require a ratchet to assemble, which many users might not have in their toolbag. Ergotron includes the required 8mm head, but you have to provide the tool.  Aside from that, all you'll need is a screwdriver and some patience, and it shouldn't take you too long to be up and working again.

The graphics-only directions are another Ergotron tradition, and some may find them confusingly sparse, especially since the WorkFit-A doesn't have the instructional video that accompanies other Ergotron products.  Tension adjustment may be the trickiest step for many, but keep at it, and keep your ratchet close at hand - you may need it.

If you've seen any of Ergotron's monitor arms before, the Workfit-A will seem very familiar to you. Like the LX, the Workfit-A secures to the rear or side edge of your desk, or through a grommet hole. A vertical column is attached to this mounting base and supports an articulating arm segment. Instead of just a VESA monitor plate, however, the Workfit-A also includes a keyboard tray and, if you choose, an optional work surface.

Once secured, the WorkFit-A can show off its incredible versatility.  Multiple joints with an ample range of motion let users work just about anywhere around the desk they please.  The arms bend, the monitors pan, and can adjust up and down independently, for optimum neck and wrist ergonomics.  Even the keyboard tray can flip upright for storage.  This same flexibility makes the WorkFit-A ideal for an office with multiple users, who should have no difficulty swiveling the arm into place, and finding an ergonomically correct position.

The gliding adjustment of a polished-aluminum arm is a treat, and its 20" height adjustment range makes it a compatible workstation for users of nearly any height. Depending on which model you get, you can expect the Workfit-A to have a lift capacity of either 20 or 25 lbs. This is more than enough to support your keyboard, mouse and, if you select an optional work surface, a handful of documents. To accommodate a variety of weights, Ergotron has included a tension-adjustment system.  A few turns of a ratchet, and joints can go from limber to locked.  Users can find a setting that is both secure enough for their work load, and light enough to move with ease.

One of the Workfit-A's advantages over other sit stand workstations is its ability to pretty much hover over your work. Other desktop risers, like the Workfit-S, One Touch Free Stand, or the Humanscale Quickstand are fixed in place, permanently in between you and your desk. Even freestanding risers like the Helium, Workfit-T, Kangaroo and Winston have a large footprint that remains on your desk at all times, although technically, with a lot of effort, could be shoved aside. The Workfit-A is literally above all that, so you can easily raise it up and out of the way when you need a free desk top.

To illustrate the benefits of the Workfit-A, and probably for a few yuks as well, Ergotron made a video, and they've outdone themselves. We had to share this:

The zip ties and mesh hose might look worrying, but cable control is actually fairly user-friendly.  Cables from monitors, keyboard, and mouse all tuck neatly into crevices in the arms, and from there can be run through a mesh tube for further management.  The end result is tidy and easy on the eyes, which isn't something we say very often about cables.

One of the most consistent gripes about the Workfit-A is the amount of shake it allows. Compared to the Workfit-S and especially to the unflagging Workfit-T, the -A is the wobbliest of the Ergotron sit-stand converter options. Typing generally will result in some monitor vibration, especially when compared to the other risers in the Workfit line. Users may find this annoying or, as was the case for one poor soul, nauseating.  A well-tightened desk mount, proper tension adjustment, and a light touch on your keyboard can help.

Likewise, the Workfit-A is also the weakest of Ergotron's sit-stand workstations. Its maximum 25lb weight capacity is on the lower end of the spectrum, and is beat out by the Workfit-S's 29 lbs., and the Workfit-T's brawny 35lb weight limit. The WorkFit-A comes in a few different flavors.  From the most stripped down, single light-duty (LD) option to a dual-screen, suspended-keyboard variant, there's plenty of choice.  Some things to note - "Workstation+" is a simple worksurface mounted near the keyboard tray.  They're expensive as an option, but come included with the suspended keyboard variants.  A suspended keyboard may cost extra, but makes getting your arms in an ergonomically correct position—especially while sitting—much, much, much easier. A Grommet Mount (included with suspended-keyboard models) will allow you to fix your WorkFit-A to the center of a desk—a good option for folks who can't find a convenient edge to clamp on to.

While Ergotron gets the credit for creating this subcategory of the wildly popular standing desk converters, it hasn't kept up all that well with new competitors that offer even greater adjustment range, and more ergonomic features such as keyboard tilt and depth adjustment. While the stripped down Workfit-A without all the options is the low-cost leader in this pack, those seeking the latest and greatest ought to at least check out the 5-star rated iMovR Cadence, the Humanscale QuickStand Lite, and the ESI Climb, and other hovering models that may get you more for your money.

Like many other Ergotron products, the WorkFit-A comes with a 5-year warranty, which includes its tension adjustment system.